One of the biggest challenges for me with the move to northern Wisconsin is adjusting my expectations when it comes to photography. Yes, the terrain is similar to southern New Hampshire, but it’s different enough that I can’t expect to get the same kind of shots I got there. I can’t go into a day of photography with the same ideas and the same images in my head. A few times I’ve come away with nearly nothing since the trail didn’t go where I thought it would and therefore I didn’t get the shots I envisioned.

The potential for great images still exists though, I just needed to look elsewhere to find them. As with most photographers, fall is my favorite time of year. The color in Wisconsin is just as intense as in New England, but the peak seems to be an even shorter window of time. So it’s important to make the most of any day in the field. A few times I went out looking for foliage and riverscapes. I was foiled. Oh sure I found rivers and I found foliage, but I didn’t find them in the right light or the compositions I wanted. Maybe when I’ve spent more time here I’ll be able to go right to what I want and get it, but now I can’t.

So instead of fighting the light and trying to force the landscape to conform to what I’d set out to capture (largely, what I’d done in the past), I tried to see what was in front of me and make the most of it instead. That still included fall color, it just came from an unexpected place.

That’s an image almost straight out of the camera. It’s water. The Eau Claire river to be exact. The sun was bright and the sky almost totally clear. Not the best for landscape photography, but perfect for reflections. That’s where the color comes from; the trees on the opposite bank reflected in the surface of the river. There’s a little riffle slicing up the middle and the blue contrast is the sky’s reflection. Once I spotted these I couldn’t stop with them. This next one is shot from a footbridge that spans the same river.

I’m sure the people I met walking here wondered what the hell I could be taking a picture of with my lens pointed straight down at the water. I experimented with shutter speed and despite my love of the slow-water technique and the images you can get with it, I liked these faster shots better. Keeping shutter speeds high lets me handhold some shots which can be a bit freeing as well.

Some things to keep in mind if you try your hand at these. You’ll need to find water that creates a lot of visual interest. That includes reflections of course, but the white water and splashes need to be composed in exciting and dynamic ways. The blue and yellow shot above is with the camera at an extreme angle so that the white and the colors go in a diagonal instead of just straight across the frame. Also the photo itself needs to be balanced even if it is a simple abstract and not a landscape. Maybe even especially because the viewer might need a few seconds to figure out what she’s looking at. Don’t forget how the eye is captured in the first place (by bright whites and colors) so be sure to lead your viewer’s eye through the picture in a way that makes sense. Lines and proportion are very important; experiment and process with care. I find that with fast shutter shots cranking the clarity slider in Lightroom accentuates the arrested motion, while easing back on it works better for the slow shutter images.

Oh and I didn’t need to use a polarizer for the any of the shots; by leaving it off I maximized the reflections and my ability to hand-hold the camera (polarizers can reduce exposure by 1 to 3 stops depending on your brand of filter). For the slow images I used a variable neutral density filter which only reduces light and doesn’t have a polarizing effect, but is absolutely necessary to get long exposures during bright daylight.

That doesn’t mean fast works everywhere. For example with this next little cascade I went slow. The reflections are still present, but the whole look is softer and less jangly. 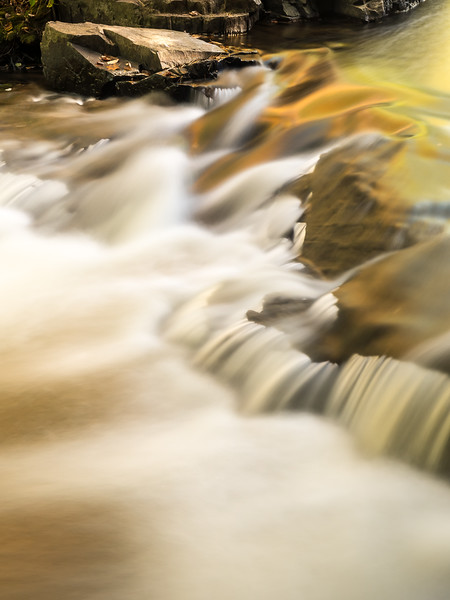 Fun little story that goes along with these silky-water images. They were taken just below the main bridge over the Dells of the Eau Claire. Dells are just gorges, but the ones here in Wisconsin are limestone not granite and have a totally different character. Unfortunately the light was just too harsh to work with and I didn’t even try for shots of the dells themselves. Also, the bridge was under construction and there were fences, workers with equipment and a huge crane in the shot. Instead I hung out on a rock under a tree and shot the little cascade. While the camera was doing its thing I caught a glimpse of something brown and fuzzy swimming upstream. An otter maybe? Can’t be a beaver, the water’s not right for them. Too fast. A few minutes later and I saw it again, more clearly, swimming just upstream from the rocks, completely submerged and heading upstream fast. A mink. It was not too nervous, the park being very popular with humans, but by the time I changed lenses it had gone and I didn’t see it again. I’ll be better prepared next time.