Last year we didn’t have furniture up on the deck except for a couple of plastic Adirondack chairs. With so many other things to do after the move, furniture was not a priority. But this year I bought a comfy couch and chairs so I end up spending more time up there. As a result I notice more and despite being really tiny, this little guy stood out – 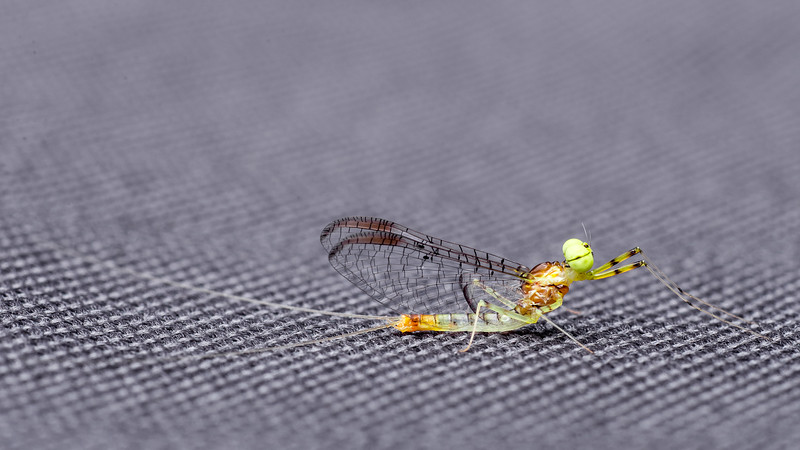 It’s a burrower mayfly; easily identified by those big green eyeballs. The body, legs and wings are about 1/2 an inch long; the whole thing barely an inch. Here in Wisconsin we have many species of mayfly and some emerge in the hundreds of thousands; clouds so big they are captured on radar and mistaken for thunderstorms. It’s said that the massive presence of mayflies are an indication of clean water, so it’s good, but it has a downside. When they emerge en masse like that they leave behind their larvae carapaces which collect by the thousands along shorelines and docks. My shoreline. My dock. The smell was so bad that I couldn’t be outside until my husband pushed them all into the current and they were washed downstream (I tried to do it, but gagged and had to stop). I’ve come across a ripe moose carcass in the woods that smelled better. Unbelievable.

One at a time they’re pretty cool though. Mayflies are one of those species that exists for the larva stage. The adults have no mouths or other digestive organs and are basically just gonads with wings. And eyeballs. They live just days, mate and die. Their corpses are wispy, weightless things that float on the slightest breeze. I noticed several other kinds on the deck, but none were situated so nicely as this one – on my grill cover.

These next little bugs were on the deck railing just at the top of the stairs and because they herd together in a little group, they’re easy to see even though they are only about 3mm long (not including the feelers). The little stripes are so cute and so I had to grab the macro lens. I also used a 25mm extension tube so I could get even closer. They seemed to be eating the gunk that collects in the texture of the decking material. Because it’s not natural wood, I wasn’t concerned although if a bug that ate plastic did evolve, that would be a big help for us! Those two little balls in the lower right are what they look like – poop. Tiny, tiny poop.

After a bit of puzzling, an answer to what these guys are finally came from an insect ID group on Flickr. 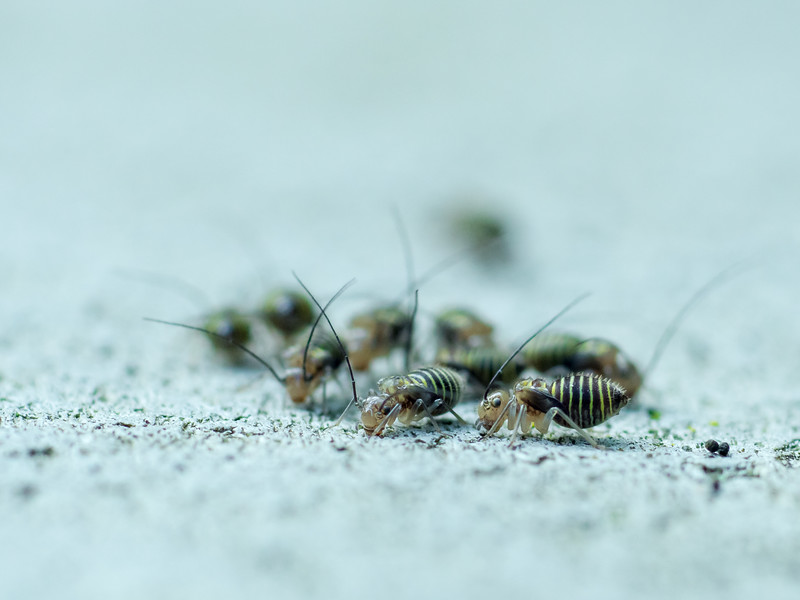 The are Cerastipsocus venosus; commonly known as barklice or sometimes tree cattle which is hilarious because in one of my photo captions I mentioned how they herd together like cows and graze. The little group on my deck was only 10 individuals to start out with and I’m glad it wasn’t more because they do mass in the hundreds and that would have been kinda icky. A few at a time are cool though and here’s how they looked after a few days –

What I thought might be vestigial wings turned out to be just undeveloped and as they moved through the larval stage they got bigger and so did the antennae. The fully grown wings added another 2mm to the overall length, but the bodies didn’t grow. In the background of the shot up there, check out the orange spot. It’s visible to the naked eye, but I didn’t know what it was. When the critter sporting it got into a good position, I grabbed the camera again –

It’s a tiny mite; a parasite. Not sure if it’s harmful or not, but the bug itself didn’t seem to be the worse off for it. I love that you can still see the stripes through the wings.

Luckily when disturbed this little herd just froze up, allowing me to use natural light instead of having to resort to flash or very high ISO in order to keep things sharp. The last one has great light; the first rays of the rising sun. Even the tiniest creature throws a shadow.

So now I know what they are, will I be evicting them? Nope. They’re beneficial and non-destructive to wood or trees. Instead they eat fungi or algae or other organic stuff (gunk, yeah, that will do) that collects on tree bark and other things like my deck. I found some good info on this website.

2 thoughts on “Even tinier dudes in my yard”