Gray tree frogs (Latin name hyla versicolor) love my decks. I’ve found and photographed them for years on two different decks in states 1000 miles apart. Since they hardly ever leave the trees, it’s a privilege to have them so near. They’re wonderful and never fail to make me smile when I find one. Even when I don’t see them, but only hear that little trill, I stop to listen. As you might expect, only the males sing and they’re singing to the ladies who, like many frogs, are slightly bigger than the males. The throat sac they use to sing makes the males’ throats slightly darker than the females’.

When I first encountered them, I didn’t know they could change colors. Usually they do this to better blend in their environment.

Living up to their name by being mostly gray with some bits of green, black and tan. But  I have also found them almost totally green. This one was near some leaves that had fallen on the deck that were almost the same color. The other day I found one on a dark green table with even more green washed through its skin, trying very hard not to be seen.

I love how both frogs are in similar poses. Little front feet tucked under chins.

When no green can be seen, frogs are mainly brown, black and tan. My husband found one up on the roof in NH when he was cleaning out the gutters. It was very dark brown, similar to, but even darker than the one in this next shot.

When he moved it out of the leaf litter and pine needles to the deck boards, it changed color rapidly. Within a minute or two it was lighter and showed slight traces of green – 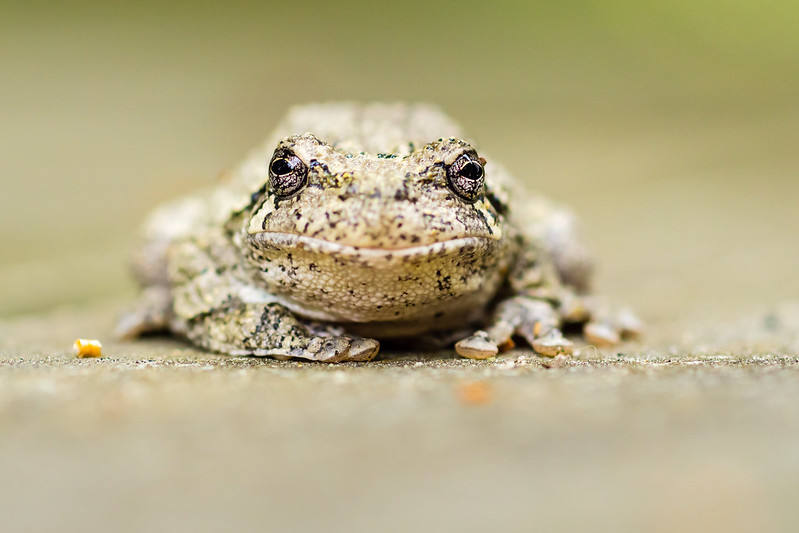 Specialized cells in the frogs’ skins allow them to do this. Collectively they are called chromatophores. Basically they blend three types of cells in three layers of skin. First are the melanophores that contain melanin to make shades of brown. Next, in the middle, are iridophores which don’t make color, but reflect light, primarily the blue end of the spectrum. Finally, on the surface are the xanthophores responsible for producing yellow. Combining the top two layers makes green, which the frogs use to adapt their colors to their surroundings. They also change color depending on temperature tending to become lighter when it’s warm.

And speaking of temperature, these little guys literally freeze during the winter months. Like all animals that hibernate, tree frogs store fat to use during that time and immediately upon waking when they really need the fuel. Unlike most mammals though, frogs stop their hearts and breathing and literally freeze about 80% solid through the winter. Ice crystals actually form in some of their cells, but their internal organs are protected. They do this by producing high levels of glucose in their cells when it starts getting colder. This sugar concentration keeps the cells from freezing and becoming damaged as a result. Then they seek out some nice crevice in a tree or log, or deep leaf litter, and wait it out. Aquatic frogs don’t burrow in mud like turtles, but instead lie on top of it where there is more oxygen. Toads do burrow below the frost line though on land. But let’s get back to gray tree frogs.

Unless they pose weirdly or you pick them up, you might never see the orangey-yellow patches on their thighs. It’s thought they use it to confuse predators. I guess a flash of thigh will do that to a snake, not having legs at all makes them flip. You can see a peek of it here –

Ok, so let’s talk toes for a minute. Check them out! Aren’t they great? Like geckos, tree frog toes have highly specialized adaptations for climbing, but unlike geckos, tree frogs are just a little bit moist and many people think that frogs stick to things because they’re “slimy”; that it’s glue alone. Untrue. What’s really going on is this; surface tension. Under a microscope you would be able to see that each toe has hundreds of tiny wedge-shaped ridges that multiply the actual surface of the toe by many factors. This expands the amount of contact patch with whatever they touch. The friction ridges on your fingertips work in a similar way to let you grip slick, wet or slimy objects without crushing them. But the frogs’ skin goes one better, as the wedge-like ridges get into tiny irregularities on a surface, the frog secretes a substance that helps those formations work better. It is a glue in a sense, but after I’ve handled a frog, my skin isn’t sticky at all. Neither is anything else the frog has sat on. This isn’t a snail trail.

So other than that they are cute and sing so nicely, why should we keep these guys around? Well I don’t know about you, but anything that eats bugs is welcome at my house!

So the next time you see a gray tree frog, stop to marvel at what an amazing little creature it is, and let it go back to sleep. These little amphibians are mostly nocturnal and just chill during the day. What a life.

5 thoughts on “So what do you know about tree frogs?”