Fall is a big deal in New England and as a photographer I always felt some amorphous pressure to go out and capture fall scenes. I still feel it here and have tried through the spring and summer to find locations that would be especially picturesque. One such spot is Timm’s Hill which is just to the west of my house in the next county. It’s the highest point in Wisconsin, but don’t be impressed. It’s 1951.5 feet. Then there’s a viewing tower which is pretty cool, but the scenery is uniform and blah, so I didn’t take any pictures. Below and surrounding the hill are lakes and ponds (the hill, btw, is only a couple hundred feet higher than the parking lot, so you won’t break a sweat climbing it or anything) and I thought I might have some luck with landscapes and water. Not really although I did manage this one by getting an old, submerged boat seat out of the way of the tripod. At first I thought it was an empty turtle shell, but then realized what it really was. 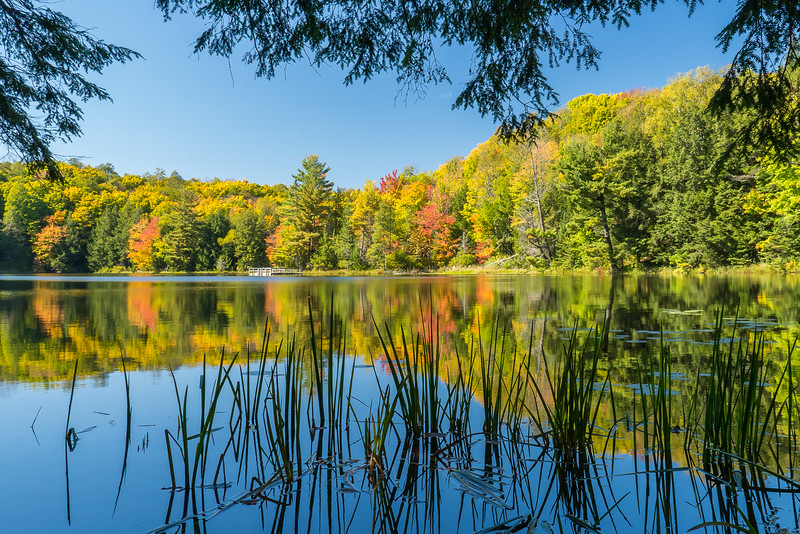 After not finding what I wanted on that outing, I returned to a location I walked through last year called Harrison Hills. It is hilly and has lots of small ponds and lakes that aren’t built on which is something that foiled me going to other areas. Even with 15,000 lakes it’s hard to find some with no houses. This little pond was gorgeous though and so I walked through the undergrowth to the edge and had to bend and hold branches out of the way, which all part of the experience. While shooting I heard a big commotion in the leaf litter and heard the sounds of chasing. The next minute, something ran over my feet. Squirrels or chipmunks I suspect. Was funny though that they just ran right over me as if I was just part of the terrain.

Little lakes abound in the Lincoln county forest as well and happily many of them have one lane tracks leading out to them and there are even boat launches should you want to try some solitary fishing. Overall they are too small to paddle, but you could do it if you just wanted to sit and read or something. You can pretty much get away from the sound of human activity in some parts of the northern forest.

Back to Harrison hills for this last shot. I hadn’t walked as far as this my first time out, but looking at the map for little ponds, I figured I had to go at least this far and lo and behold there was a little bench so you could relax and take in the view.

So these will work for 2016 foliage shots. I still would like to do some river work and stuff with farms and/or barns, but the exploration is part of the joy. I’m still getting to know my adopted state and it is always interesting.