Way back in November 2016 I went to New Mexico for a long weekend and one of the places I visited was Carlsbad Caverns. I love caves and really hit it lucky that I could bring my tripod down into the depths of the earth (on the self-guided tour). It helped a lot. A few years ago I visited similar (but much smaller) caves in Oregon where tripods were not allowed and oh the ISO I had to use! Here I stuck pretty much to 500 ISO which is a good compromise between having fairly quick shutter speeds (just for time’s sake) and noise.

No matter where you are, it’s always important to remember your pictures are secondary and to respect the rules and regulations around photography. No tripod means no tripod. No flash means no flash. Sticking to the trail and not putting a leg off means just that. That’s important because a bunch of jerks flouting the rules just make it harder for the rest of us. I think I goofed once on this trip and a ranger pointed it out, nicely, but firmly and I paid better attention. Eek! 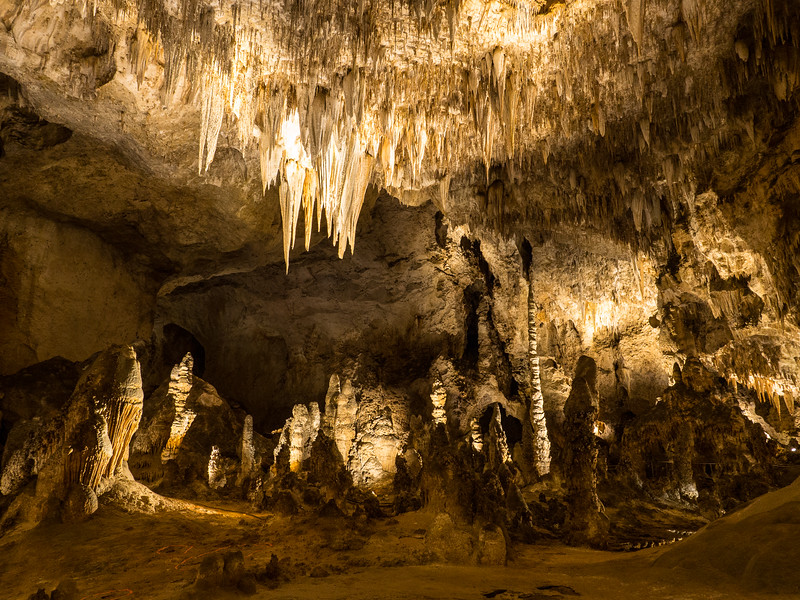 So, here are some things that worked for me. Shooting in caves is always challenging whether you have a lighted system like at Carlsbad or unlighted like the Lava Caves in northern California. Paramount is dealing with the lighting. If the caves are lit like these, it’s in pockets, pools and slices. It isn’t uniform which makes for great texture, but hot spots where you will blow the highlights. With today’s cameras though, you can still underexpose and capture a lot of detail in the shadows, so I recommend just barely clipping the highlights. For me it was overexposing by about 2/3 of a stop overall.

Then in Lightroom I pulled the highlights down, increased exposure, waved the adjustment brush around a bit and things evened out without being too noisy. With images like these, having lots of texture, I find boosting the clarity helps emphasize that primary aspect.

Another challenge is white balance. No matter what light source you have (flashlight painting is fun if you get the chance) it will create color casts that aren’t natural to the stone. It’s amazing what light does to color and for the most part, the white balance in camera was ok, but my husband had a very neutral flashlight with him and I realized how warm the light was down in the rooms. So I cooled it off a bit in Lightroom, just so that it wasn’t overwhelmingly golden. I also dialed down the green tint and boosted the magenta just slightly.

Then there’s composition. Caves are intensely three-dimensional. There’s a lot to look at and most of it relies on the mind’s ability to separate shapes, color, texture, light and shadows. The camera isn’t good at doing all of those simultaneously. So at first I shot with an eye to what I was seeing. Only after time did I change that to what the camera could convey. Compare these two images. The first is a pool of water that has collected at the very bottom of the cave and I find it to be pretty abstract at first glance. You have to figure out what you’re looking at and to my mind that takes longer to do than the first one (since you already have the cave context for the pics, that helps a lot rather than going in cold).

So that was my experience in Carlsbad Caverns. It’s a true wonder of nature and I highly recommend visiting even though it’s in the middle of nowhere. The walk down is staggering (if you’re up to it, if not there’s an elevator, but walk if at all possible). Jaw-dropping formations and just the age of the whole thing really makes you realize how insignificant you, and all of humankind is. We’re just a blip. The cave is eternal.

6 thoughts on “Down Below”