As a lover of abandoned buildings, it was really, really hard for me to go by so many sites in our tour bus, unable to stop and explore. So. Hard. 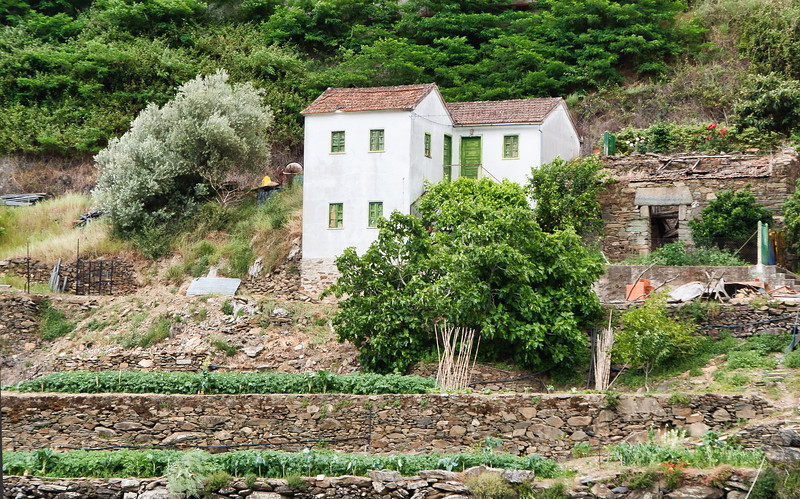 Since the Douro river valley has been used to grow grapes for wine for roughly 2000 years, it makes sense that smaller holdings are bought up by larger companies. The buildings that are on the property aren’t needed so they just crumble. 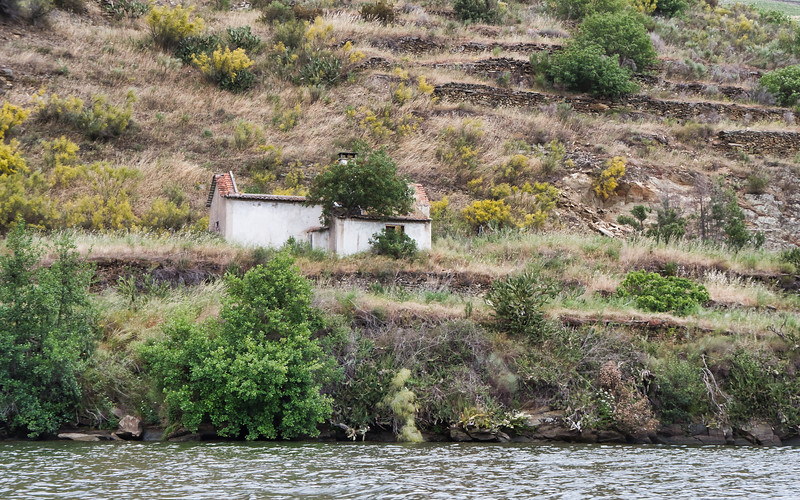 There were a lot everywhere, but I couldn’t photograph many. These first few were taken from the rabelo boat we sailed on for a couple hours. 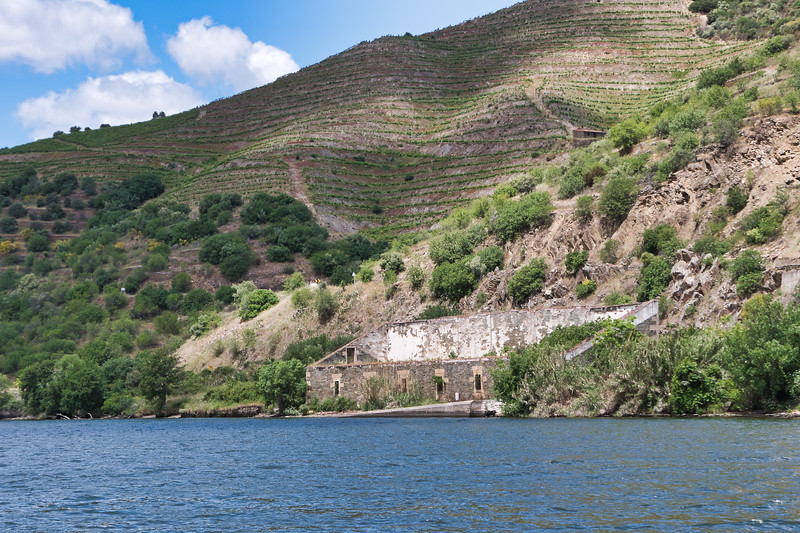 When I saw this next one from the boat, I had no idea that I’d get to see it close up. The landing area was right next to this.

I really wanted to go behind and explore the ruined patio, but the bus was already waiting for me so I had to be happy with just this one. The angle is really extreme so it’s pretty great. 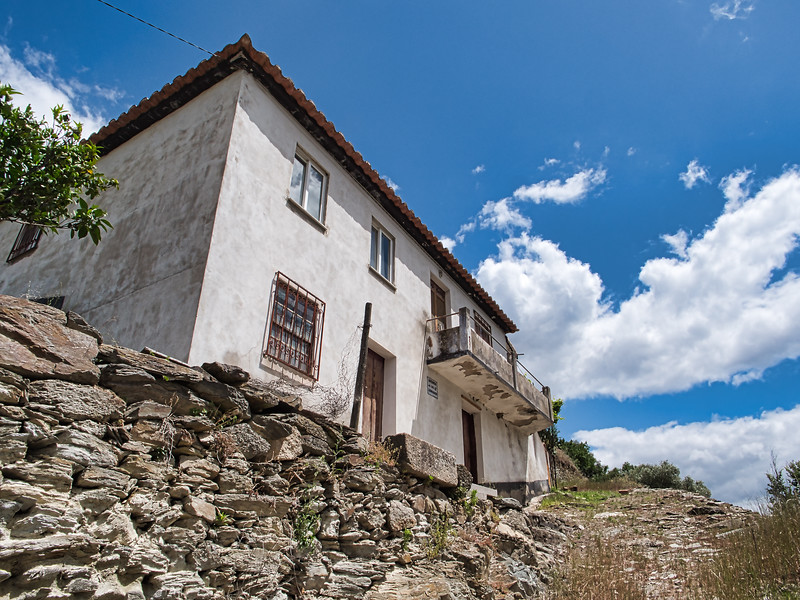 This next shot has a funny story. We had lunch and marvelous wine at Quinta Nova up in the hills. On the way we went right by this and as it turned out, it wasn’t far from the end of the driveway/road leading to Quinta Nova. So when our tour was over and lunch was done, I took off to try to get a shot. Everyone else seemed occupied and not in a hurry to leave. That changed in a hurry.

While I was running down the road I could hear (and see) the bus loading. The race was on. Would I make it to the site to get any pictures and could I get any good compositions even if I had the time. The bus was moving, but I was there. And wow, the light was awesome. Ok, the bus can come by and pick me up anytime. What’s that yelling? Oh it’s my husband in the middle of the road. Why is he yelling at me?

Because the bus isn’t coming back the way it came, it’s continuing up the hills and around into Pinhao again. So I had to hoof it all the way back to the driveway where the bus was patiently waiting. When I climbed aboard, sweaty and out of breath I gasped that I got the shot. My new friends cheered.

This next shot is in Guimarães, a town with great history. Walking back to the bus after touring a castle and stopping for a beer at a sidewalk cafe. 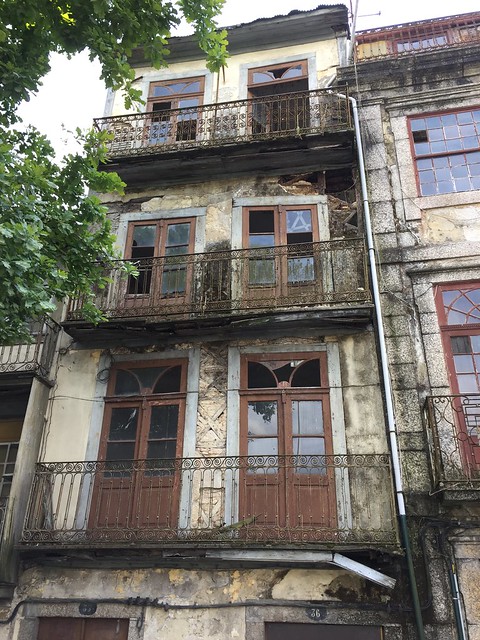 But back to Pinhao for a minute. Even with the thriving wine industry all around it, the little city has its share of abandoned buildings. One afternoon I had time to walk around a bit and I found this house next to some giant…boobs? What the heck are those things?

I was sad to see this whole building going to hell. It looks like it was colorful and vibrant at one time. The little details and the patterns are great. And believe it or not there’s a for sale sign!

That shot was taken in the morning, this one in the afternoon when we got back from our day at Quinta do Vesuvio. 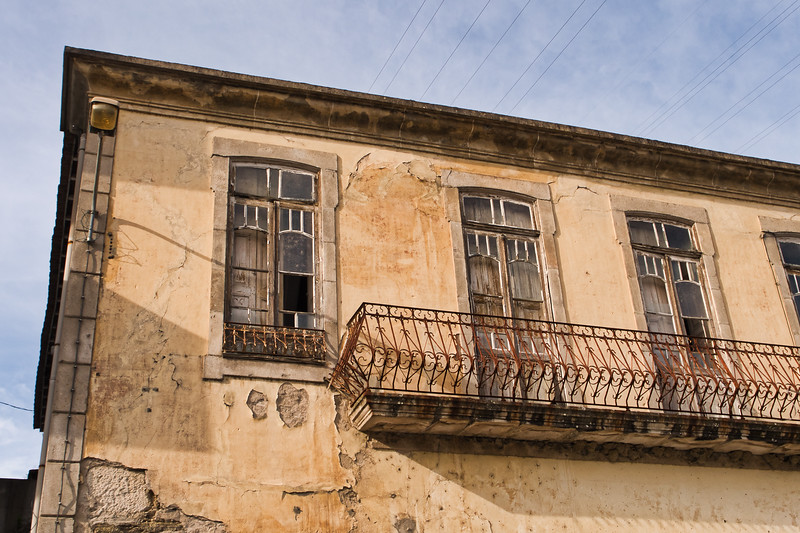 Yellow is a very popular color for buildings here and this next one just broke my heart. It’s by the railroad station and the tracks run right by (How often does the train go by? So often you don’t even notice!) so it’s not surprising it’s abandoned, but look how cool it is.

Since I didn’t have time to get up close and personal with many of these buildings, small details were had to come by, but at the Quinta do Vesuvio there was time. Unfortunately getting the whole building in the shot was impossible, but I did find this lunchpail. Bomb? Proto kettlebell? Whatever it is, it’s in good company in this pile of rubble. 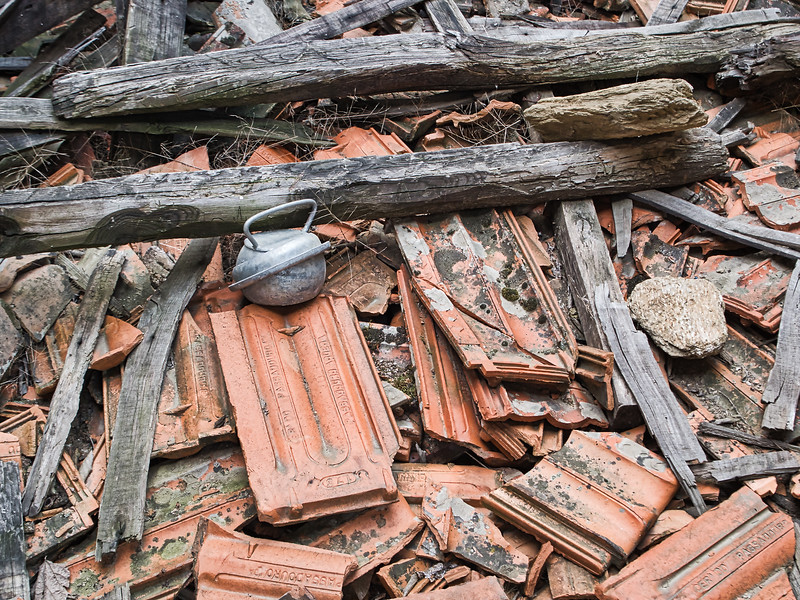 This old quinta was directly across the river and I longed to go over there to see it. Not just for itself, but so that I could get a shot of Quinta do Vesuvio from there. Alas, it wasn’t in the cards. 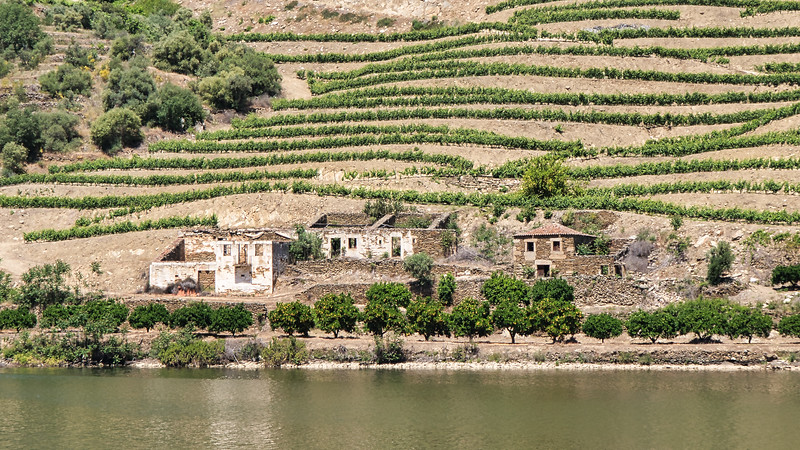 Phew! That was amazing. We have a lot of abandoned stuff here in Wisconsin, but seeing a whole different kind of architecture was great. I long to go back. But before that happens I gotta get at least one more Portugal post done. Yup, there’s more. Porto and the castle in Guimarães. It will be worth it!