Before bug season really sets in, I take advantage of the relative peace in the woods. It isn’t as spectacular as full summer, but neither is it as itchy. One of the itchiest places is probably the Averill-Kelly Creek segment of the Ice Age Trail. It isn’t far from my house and I’ve hiked on the segment next to it, but curiosity got me because this trail crosses the New Wood river. Literally.

But first some trails.

It was a bit overcast, but the little leaves and fresh greening kept me happy. And that the mosquitoes weren’t out in force yet. The frogs were singing like crazy though.

Some wildflowers were up and I had a go with some cutleaf toothwort. 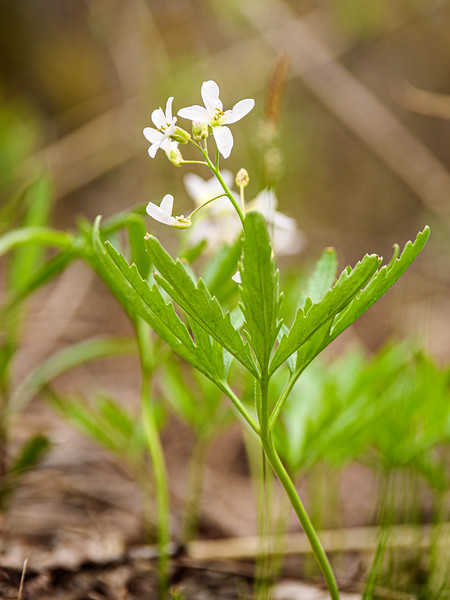 I knew that this would be a short hike for me. A quick out and back. Unless I wanted to get wet.

Yup, that’s another trail marker on the other side. The bridge, once part of the trail, is now off limits. At least I think that’s the timeline. Google maps shows the IAT veering off the trail as it is currently. It leads to a bridge that is now next to a tennis court. Seems much of this land is private and the owners want the bridge to themselves.

It’s going to be a long time before we see another. But the river is shallow and doesn’t have a strong current. One of these days I’ll have to just shuck off my boots and cross. But the day I was there was’t the one. I had other ideas for when I got back to the Jeep, but that’s another story.

Further up that way are the two creeks that the trail is named for, and so far as I know neither of those are bridged either. Die-hards only do this one. The crossings, the bugs and the remoteness make this one a lightly used trail. Also the parking is non-existent and the signage is nearly buried. It was tranquil though.

And as I turned back I noticed wild ginger at my feet. There was tons of it and lucky for me one near the trail was flowering so I could get the macro lens right down to it –

There were a few other things to keep me interested and any day outside is a good one.