Two gear-related posts in a row!

No don’t worry, my beloved Olympus 90mm f2 vintage lens hasn’t died just yet. It’s still alive and working fine, but I did see a used Leica macro on sale at a place I trust so I grabbed it. A while ago I did some research and decided the 45mm f2.8 was the one to have and so I’d been keeping an eye on prices, both used and new. The one I have is used, but in EXCELLENT condition. A bargain. 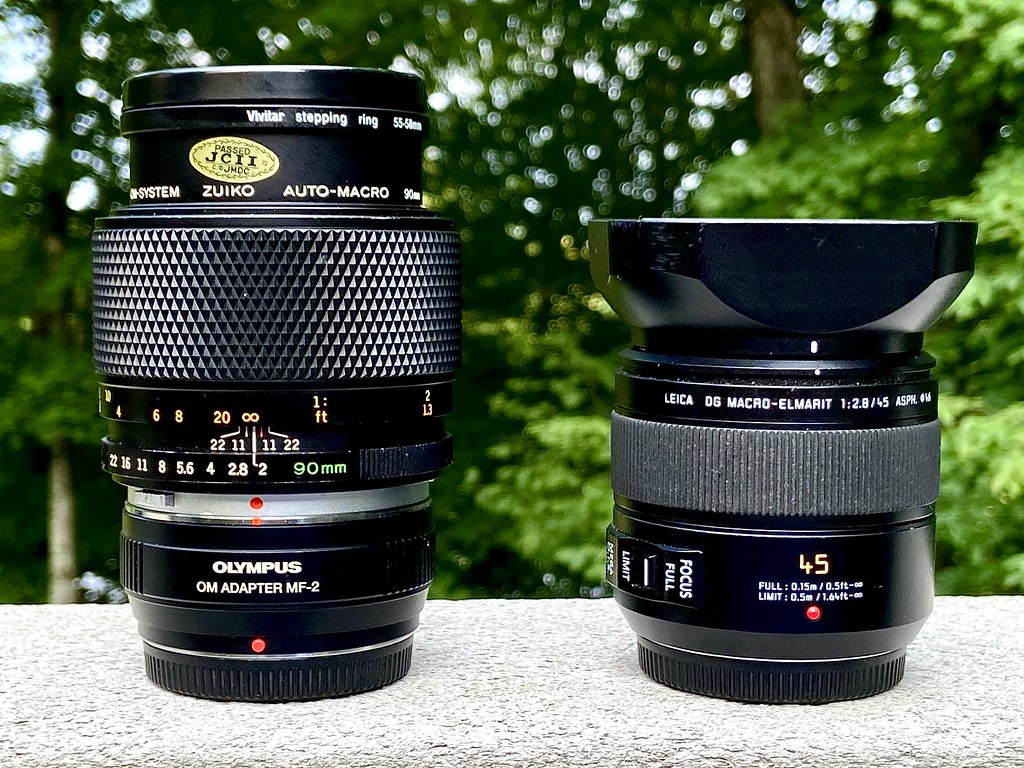 It is smaller, lighter and a true macro lens in the sense that the image of your subject on the sensor is life sized at its closest focus point. That’s about 3 inches from the subject, or maybe even closer. It’s crazy and the biggest change for me. The OM 90mm had approximately a 9 inch working distance and because of the thick adapter, may have also been a true macro or even more by the time the image hit the sensor. I haven’t gone out and tested them side by side because I find that kind of thing tedious, but I did do one little scene (on tripod) –

I processed each shot side by side in Lightroom, but I didn’t take them one after the other. I should have, but it was wicked humid and the 90 took a long time to clear after fogging up from being brought outside from the air-conditioned house. The 90 has a little less contrast, but a longer working distance for the same or greater magnification. The colors also render a little differently. I haven’t used it much since I bought the new one.

Hand-holding is a new thing for me and a macro lens. I’ve been doing it a lot because I can (Dual IS, baby!). I’ve also been using a support (beanbag or tripod), so I haven’t gone completely rogue. There are fewer keepers as a result. The auto-focus is finicky and sometimes doesn’t hit right when I think it has. Also it can be a tough thing to get it to focus close and not on the background.

So I’ve had to change my process a little. When it comes to focussing I’ll either force it to focus close by choosing another subject that isn’t so separate from the background. This gets the lens into the close range and sometimes I can get it to focus on what I want with this method. Using pinpoint or single point focus area is critical. When this fails I put it in manual and do it myself. Often times I’ll take an auto-focus shot at the same time, but sometimes the manually focussed shot is the keeper. It’s relatively easy to do with the help of focus peaking and being able to shrink or enlarge the focus area on the screen.

It’s either that or take a ton of shots hoping for at least one that works. That’s how it went with this mayfly on my back door –

IRL it’s about 2 cm long and very delicate so focussing was tricky. I like the way it came out though. Very close shots aren’t all the lens is good for though. I like it for microscapes and close ups that aren’t true macro images.

That image is so crispy you can almost touch it. This one, too –

Not many shots have showed off the bokeh qualities, but a couple have –

Not bad. Especially for micro four thirds. But getting really close is what this lens does best. Not just for magnification, but also working distance. I’m used to setting up farther away from my subjects, but this lens can get things in focus just a couple of inches away. It’s weird, but I’m getting used to it.

I even tried a little post-focus stacking (you can see some errors, but it’s not too bad) –

On the computer or tablet screen each of these critters is larger than in real life. Probably on a cell phone screen, too, for that matter. Most of them were less than 1 inch long. Even this tiny toad was under an inch –

With the naked eye you can’t tell from a distance how many tiny flowers are in this group and you have no idea that they only have four petals. It just looks like a weed.

Overall I’m pretty pleased with it. The sharpness is intense and it’s about 1/4 of the weight of the OM 90mm. Mushroom season is upon us so no doubt it will get a lot of use! You have been warned.