On a recent outing on the Wisconsin river I experimented with shutter speeds. Often photographers automatically go for the long exposure when it comes to flowing water. Once you’ve mastered the technique, it’s a gimme and for the most part produces very striking effects.

But is it always the best or most appropriate? I suppose it depends on what you’re going for. Artistically it can be a great way to contrast motion and stillness and expose patterns that you can’t see the same way with the naked eye. I love it, but sometimes I want to convey the power, noise and sheer presence of a mighty flow. The smoothly swirling patterns, while lovely to look at just don’t showcase those qualities. So I tried my hand at much faster exposures and found those can also produce some striking photos. 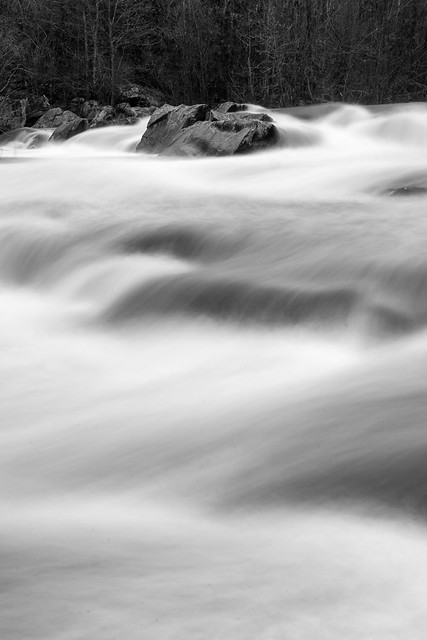 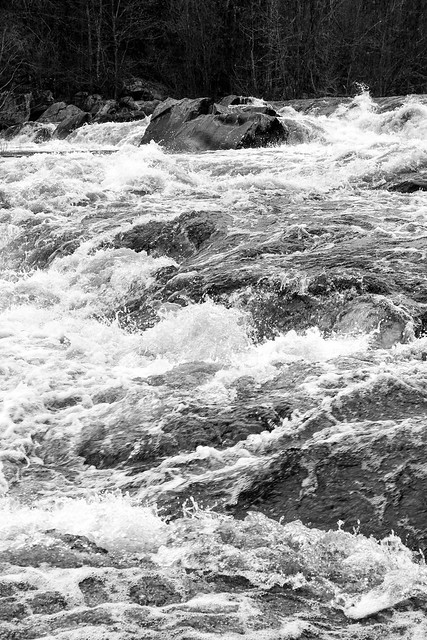 These next shots are more traditional waterscapes and are from different positions on the same section of the river, but the emotions they convey are quite contrary. 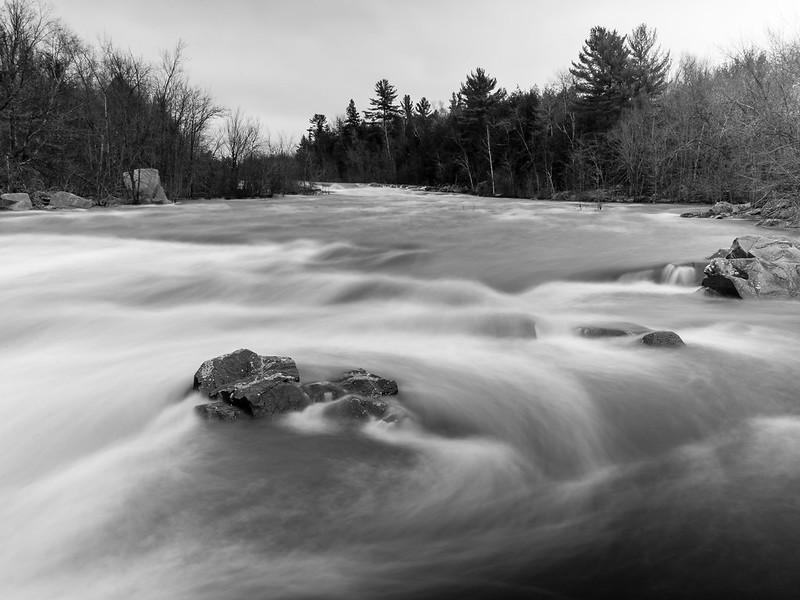 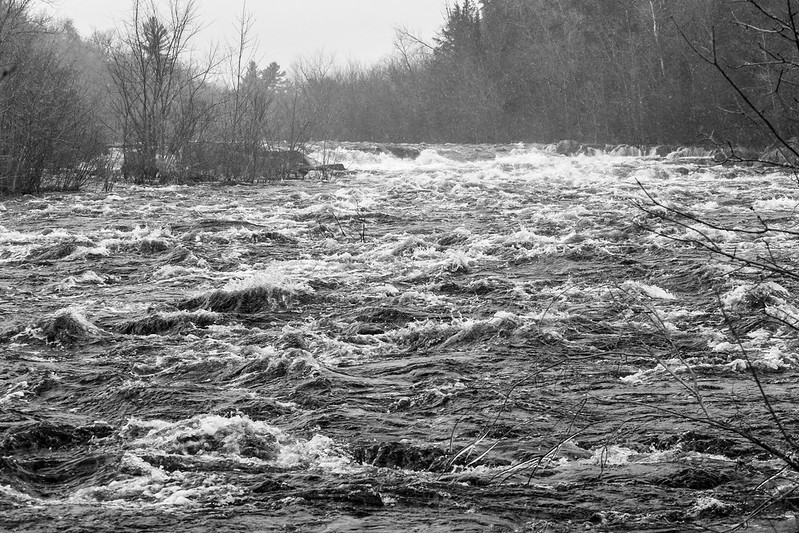 The snow in that second image helps bolster the drama of a river in full roar that in the long-exposure image isn’t all that apparent (it had stopped snowing by then). But in terms of how each shot makes you feel, take a few minutes to absorb that. The first for me is a bit timeless and hasn’t much in the sense of power that the second does. Without looking at the EXIF data, there’s no way to tell how long it took the water to flow that much. Even if there was snow still flying, it would be blurred and difficult to see. It’s a more restful and possibly a more artistic presentation of the river and the second you could categorize as documentary in nature. It has an immediacy the first doesn’t have.

Depending on how much surface variation there is to a brook or river, I usually time my long exposures between 5 and 15 seconds. Sometimes I go longer, but not often. There is cool stuff below that range though and just leaving the shutter open a fraction of a second can produce some surprising results. Here’s an example of what I mean. This is a slice of the Wisconsin I liked the look of when I was out on some rocks in the midst of the roar. The water is tannic and so naturally the color of tea or root beer. It’s not polluted! Tons of fish, insects, reptiles, birds and mammals depend on this river and it’s hugely popular with two-legged fishermen as well.

I started out with just a bare lens, no filters, working mostly hand held with high shutter speeds. I had my tripod with me though so I did use it for these next shots –

It’s not bad. It has some appeal and visual interest. Could the water action be more interesting? Sure, but that’s really hard to predict and so you’d end up shooting bursts of images hoping for the best. If you’re looking for this stop-action, frozen quality, I’ve found that’s really the only way since the water’s shape is so random. First look for a dynamic part of the water and properly compose and frame. Using live view you can see if the results produce the visual attraction you want. If not, find another section of water and give it another go.

What appealed to me with this little slice was the rocks on the banks; the frame they provide. With the frozen water image, I just didn’t get the contrast I wanted. The rocks are cold, implacable and they seem like river could never affect them (though it does in the end; water always wins). The Wisconsin is active, alive, unpredictable and relentless. So I put a neutral density filter on and tried a long exposure –

OK, so we’re partly there. The rocks are steady as ever and boy do they look like they’d break your bones. All well and good, but look at the water.

Yeah, not too interesting. It’s just one big, featureless blur of a root beer float. To me it’s boring and lacks any sort of quality that would make you look twice at it. Lucky for me, I removed my neutral density filter and added a polarizer only. Using live view I found a shutter speed that would blur the water somewhat, but reveal the deep bronze color. Patterns emerged!

The water still conveys force, power and speed, but now there’s something to snag the eye. By having some blurred action the contrast with the granite boulders is apparent, but it’s not so slow that the water loses all character. An in between shutter speed reveals the light and dark of the water as it moves and this gave me what I wanted when I was making this image.

So why did I use two different filters? Well, it was a bright, but overcast day and no matter how low I set my ISO the camera couldn’t get me a very long exposure. I also don’t like to crank the aperture all the way down on any of my lenses. Doing this almost always puts you out of the lens’s sweet spot (usually between f 4 and 11) and images can be comparatively soft. Using a ND filter will get you the longest exposures depending on how dark the filter is (and subsequently how much light it blocks; think of it as sunglasses for your camera). Using a polarizer is a step between a naked lens and a ND filter. My particular polarizer is a B&W and only reduces the exposure by 1 stop. Some will be darker so your results will vary, but for this particular day it worked perfect.

My take-away lesson from this experimentation is a better understanding of how shutter speed helps to create the mood for a moving water image. Whether I want something soft and peaceful, showing lines and highlights that can’t be seen with the naked eye, or something sharp and arresting, showing water frozen in action. But I can’t forget that the extremes don’t always serve my intentions; I need to be ready and flexible in my approach in order to produce the photo I want. Hopefully you get a chance to experiment, too. If you do, give me a shout and show me what you did!