The other day I went to the Mead Wildlife Area which is south of where I live, down in the lower section of Marathon County and crossing over into two other counties. My reading led me to believe there might be opportunities to photograph some wildlife, probably birds, so I brought my longest lens and I am so glad I did. It’s migration season and birds are restless this time of year.

While walking near the Visitors’ Center I noticed some really large white shapes in the distance. For a second I wondered if there was a small airport nearby. When a couple more appeared I got the binoculars and saw they weren’t planes, but birds. Only two white birds have wingspans wide enough to be mistaken for small planes; trumpeter swans and whooping cranes. Two approached and I followed with the binocs as they flew in low right over my head and landed in a small pond to my left. Amazing. I almost couldn’t focus the binoculars that close. 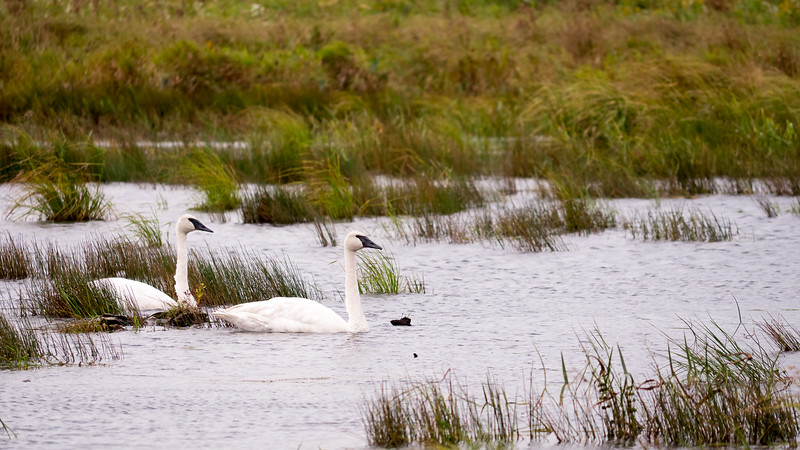 Not being an experienced wildlife photographer, I followed my instinct which was to give them time to settle in. So I hung back and shot them with the long end of the lens, getting some of their environment into the photo as well. Then I walked away from them, out of sight of each other, to a bird blind at the end of the trail. It was well constructed and situated and I might use it in the spring migration period.

Then I walked back toward them. Slowly, stopping frequently to set up the tripod and occasionally just watching them with the binoculars. It worked. They came out from the grass and gave me a good once over. I got closer. They didn’t seem to mind. On the contrary, they seemed curious about this weird creature with all the legs. Soon I didn’t have to use the long end of the lens anymore. 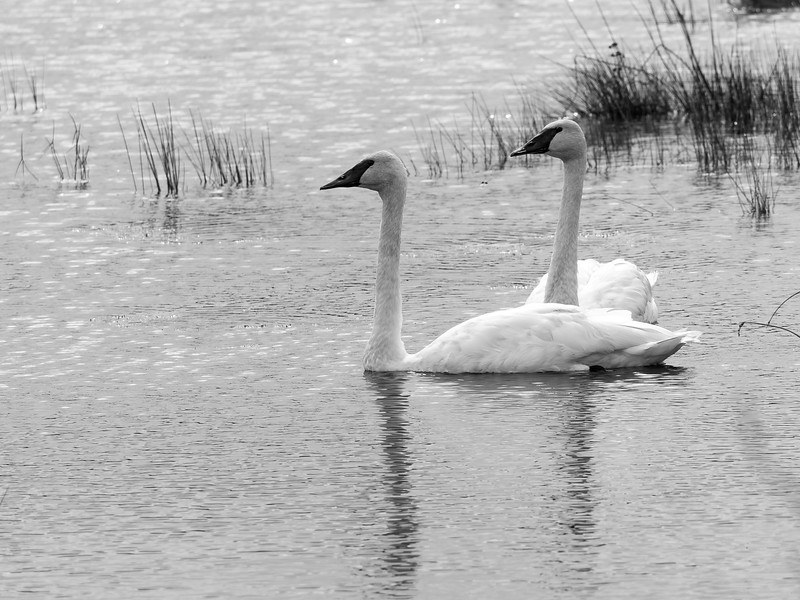 As I’ve said before, I need practice with my 100-300mm and while I’m not glad it wasn’t whooping cranes I saw (and want to kick myself if I missed the shots), trumpeters were a fine subject for some practice. I still need to find a handheld technique, but with the tripod a single point of focus worked because I could change it quickly on the screen with my finger. Handheld using a multi-focus-point setting caused the camera to hunt a lot and miss focus. I’ll have to experiment more with it.

The light was reasonably bright, but still somewhat diffused by clouds and so the ISO didn’t get cranked too high. I use a custom mode I created for the GH3 that is shutter priority and auto ISO. That way I can freeze action with a high shutter speed, but not worry about aperture or light sensitivity. I also change from a single shot with the press of a shutter, to multi shot. And that’s how I got this next image –

I spent about an hour with this pair and took a ton of pictures, only a few of which I like enough to publish. Mostly it’s because they just won’t pose. Lol. I get why patience is the thing you need most in bird photography. Patience and time because as you see above, eventually one of them will do something and if you’re lucky, observant and know your gear, you’ll get the shot. I love how this one shows how the feathers are arranged on those amazing wings. And the depression in the water from the downdraft. Oh and if you look close, you can see water droplets on its breast and belly. So wonderful.

2 thoughts on “A quiet interlude, with swans”