Cypress swamps have figured in my photographic fantasies for a while, but until recently the opportunity to go hadn’t come up. Since my husband is semi-retired these days, we travel more than before and a road trip to New Orleans wasn’t so crazy. And I got to spend three days in swamps. You know I love a good swamp.

The first thing I learned is that because the area is basically a hole in the ground that is often covered in water, there are few hiking trails that far south. Luckily some were nearby and an easy drive. Also lucky was my discovery of day-trip photo guiding tours which I’ll get into later.

I came back with hundreds of photos. Even in rain, chilly temps and flat light I found beauty and wonder enough. And yes, alligators. 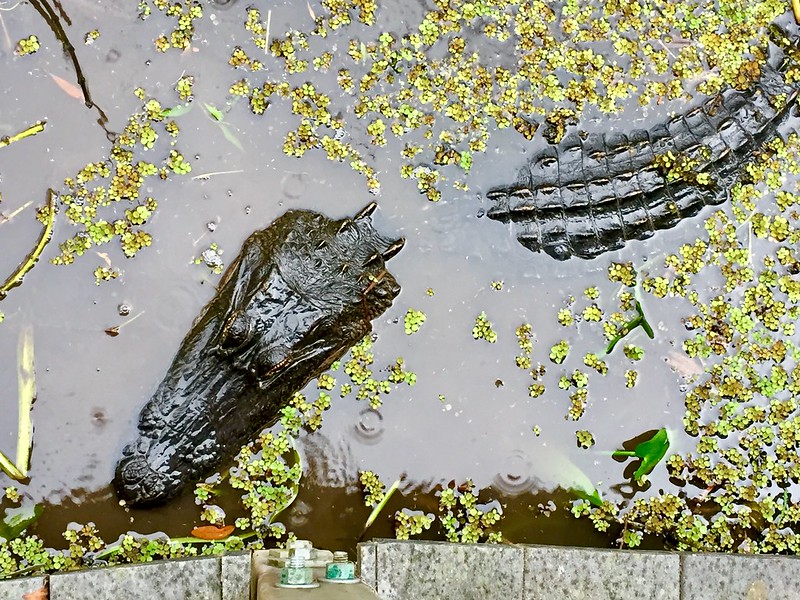 Not as many as I’d have liked since it was cold for them to be active (60 F), but you will see a few shots.

This is going to be one of probably three posts (one for each day I spent there) and I’ll try not to overload you with photos, instead I’ll give you the best ones and link to the gallery in the last post so you can get a fuller experience.

We didn’t stay in the city itself, but outside of it because of the proximity where my husband was attending a seminar. That ended up being great since it was so close to the Jean Lafitte National Historical Park and Preserve. Phew. Think you could have a longer name?

I got to the park very early and lucky for me the gate was open. Surprised there wasn’t a fee, but there wasn’t. The visitor’s center wasn’t open so I hit the boardwalk.

I had hours to explore a very tiny trail system. I strolled. I stopped. I gazed around me for longer than probably anyone does in this park. That was one thing that really hit me once the visitors started coming. I don’t know how any of them could have expected to see anything with their constant talking and walking.

Like this little guy. I’m probably the only person who’s ever seen it. Or at least that day. 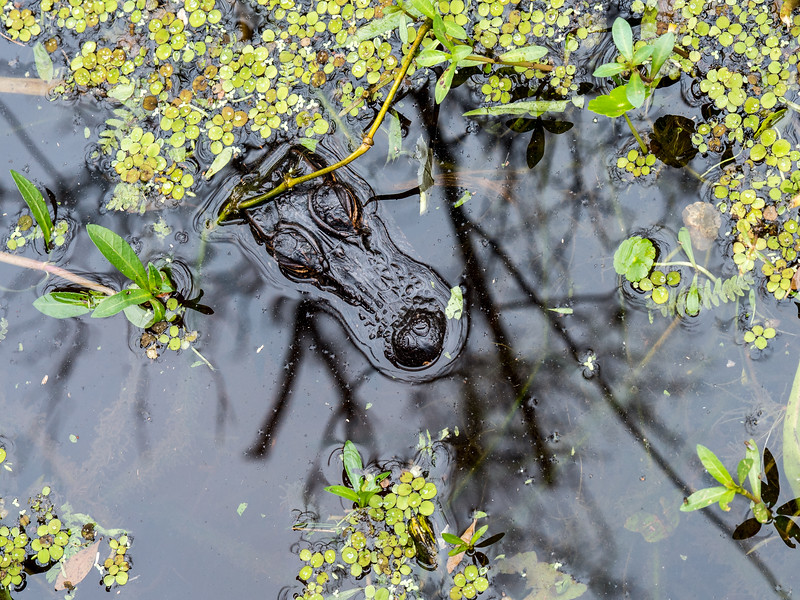 It’s probably only a 2-footer. A youngster and s/he was hanging out by the end platform on a spur trail. I stopped to look at all the amazing vegetation and because I was quiet and basically still, I got the shot by looking straight down. So wonderful.

But I’m getting ahead of myself. Early on I met a couple of other folks, a father and daughter, who come to the park almost every day for their morning constitutional. We got to talking about their love of the park and how it was my first time in a Louisiana swamp (they were amazed I was from so far north, and no, they’ve never been up this way) and we parted ways. I kept strolling.

Boardwalks enchant me all by themselves, but this environment and the boardwalk kept me feeling fizzy. You know when you are doing something you’ve always wanted to do, you get that sensation as if there are bubbles in your blood? That’s the one. For most of the day I was supremely, exquisitely happy.

In this next shot you can see what the blog post title refers to. Bald cypress knees. At this point I had no idea what they were, at first thinking they were gnawed off saplings, but when I got to look closer I realized that wasn’t it. They’re so odd and I didn’t learn what they were until the next day when I read a sign in another park. Even though they have a name, we still don’t know what they’re for. Only bald cypress trees produce them in this way, but not all trees. Ones on dry land or in perpetually deep water oftn don’t have them or have very few. Mainly trees in shallow, but variable, water have them. The theory that they are for oxygen exchange/absorption has been eliminated because cypress don’t have the necessary physical structures in the bark to make this happen. Another idea is that they are part of the stabilization matrix, like the buttresses, to make them more resistant to high winds. Unfortunately this is difficult to test and therefore remains unproven. Don’t you love natures little mysteries? 200 years of looking at them and we still don’t know.

A few minutes later I met my two locals again and this time they wanted to show me the alligators. They almost took me by the hand they were so eager to show the newbie. Rightfully proud of their local gators. And here is my very first wild alligator – 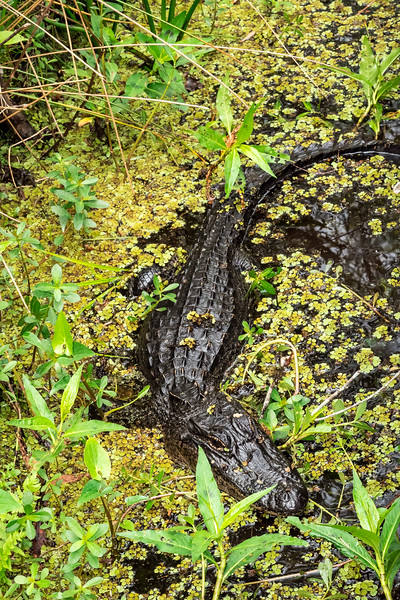 It’s probably 3-4 feet long and was almost invisible on the side of the boardwalk. Lucky for me I had two very observant guides. But they couldn’t waste much time on this little one. It was time for the big one.

This animal was impressive. It hangs out in a certain section of trail not far from the visitors center. Compared to the other gators I saw, it was quite active. The dad half of my two tour guides has lived in the bayou his whole life and he spent a lot of time hunting alligators. He can’t stand to eat them, but he knows how to talk to them. Growling softly, he repeatedly coaxed this large reptile out of hiding. Even with a big piece of tail missing it is easily 6 feet long. It growled back, but that was about all the energy it could muster.

Soon it began to rain and my new friends headed for shelter. In Goretex and with a rain-proof camera I stood under some trees to wait it out.

But eventually I headed for the visitors center, too. The rain passed after a while I headed back out. For this Wisconsin resident, the green was a very welcome sight. So lush and reasonably quiet. It was alien, yet familiar. All swamps are similar.

There are a lot of web sites to tell you about the park, its history, flora, fauna and even secrets, so I won’t be doing that. I’ll concentrate on my experiences and what I saw.

Around a bend, some movement caught my attention and I crept forward carefully – 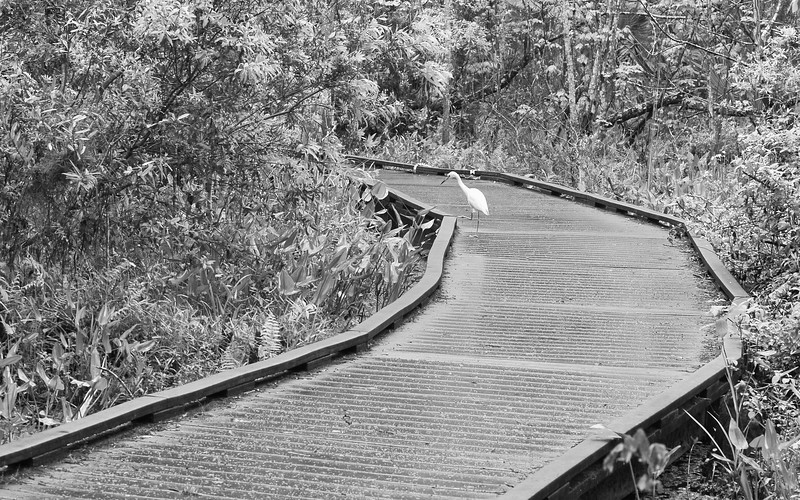 A great or common egret. My first close encounter. Well, kinda. They’re in the ditches by the road by the dozens and so they’re kind of ubiquitous. Still, I’d have been happy to spend more time photographing this one if a couple of other folks in a hurry hadn’t blown right by me. Oy.

That was the last time I let that happen. Later in the day I stopped and shushed people before they could frighten off my critter, then showed them what I was looking at. Time and time again people were amazed that I “noticed” that animal. It’s not noticing. It’s being in tune. It’s slowing down and shutting up. Actually taking your eyes off your phone. Being in nature is more than just being outside or in a park. You have to step away from your human activity long enough to see what you always overlook. Over the years I’ve learned this the hard way and I’m always telling myself to slow down and really see, hear and absorb what is all around me. 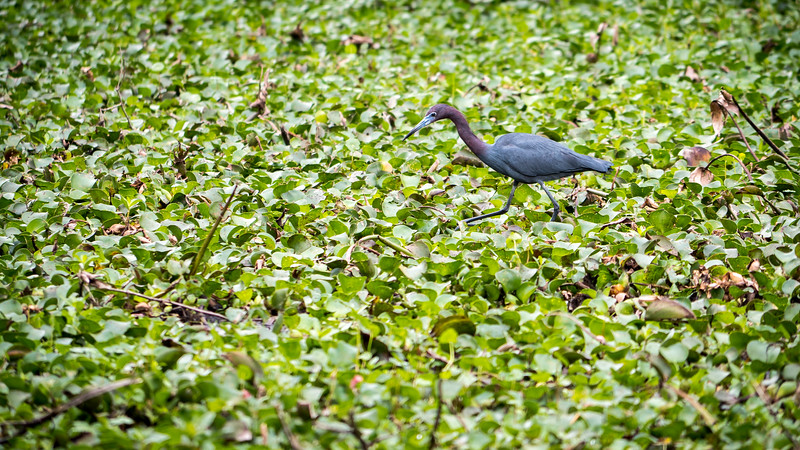 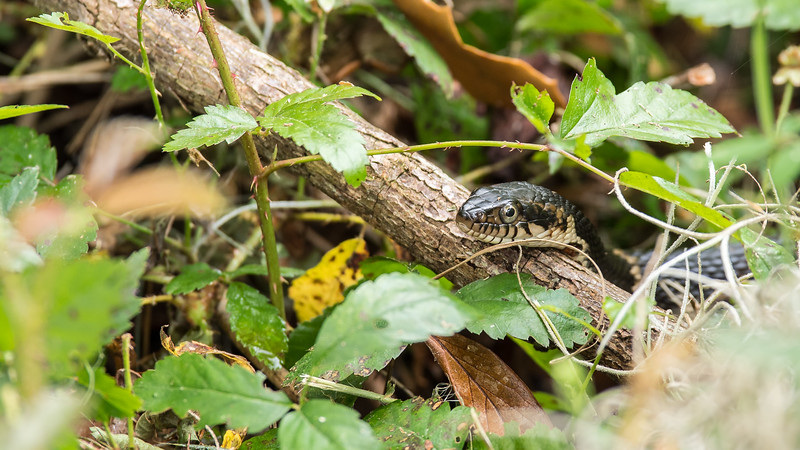 Sorry to be so crabby, but I managed to find some humor in it after a while. On a high bridge over the water, some folks were admiring this guy – 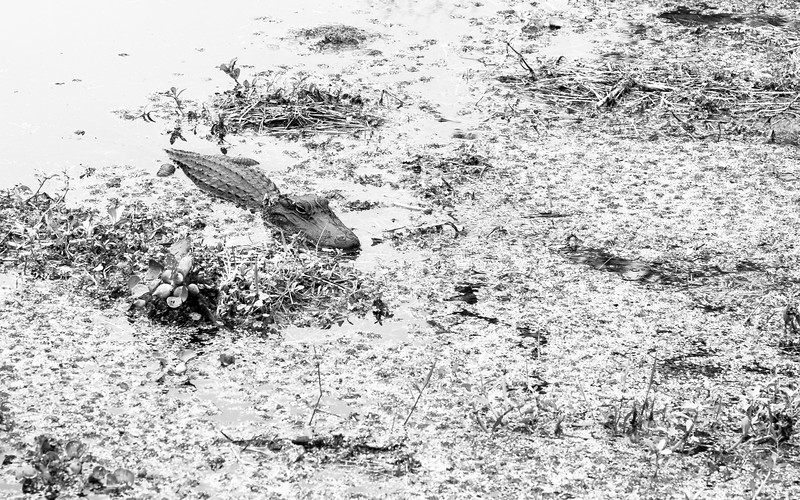 They had enough and moved off. I stayed. Wondering at the man-made canal and what else might be under all that vegetation. Then I looked straight down and slightly under the bridge – 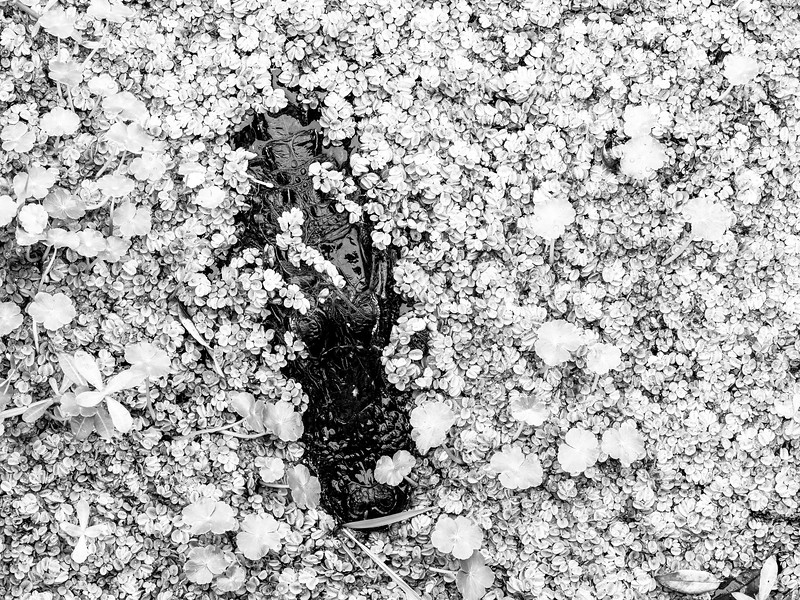 The biggest alligator I saw all during the trip. It’s probably a ten-footer. The folks who just left me never even saw it. My secret.

One bit of info I will pass on is that Spanish Moss, like petite syrah, is neither.

It’s actually an epiphytic flowering plant that is dependent on, but not parasitical to, the trees on which it grows. An epiphyte absorbs nutrients and moisture through its leaves from the air and rainwater. Spanish moss can grow many, many feet long and it dangles and sways everywhere. It’s mystical and otherworldly and enchanting.

Even while gazing at the larger landscape, I was caught by small details and oddities. Like this.

It’s hard to really envision from this view and I have more photos, but I’m saving them for the next installment since they’re from the following day. For those of you who are just as clueless about these little structures as I was, don’t google yet! I promise to reveal all in the next post. 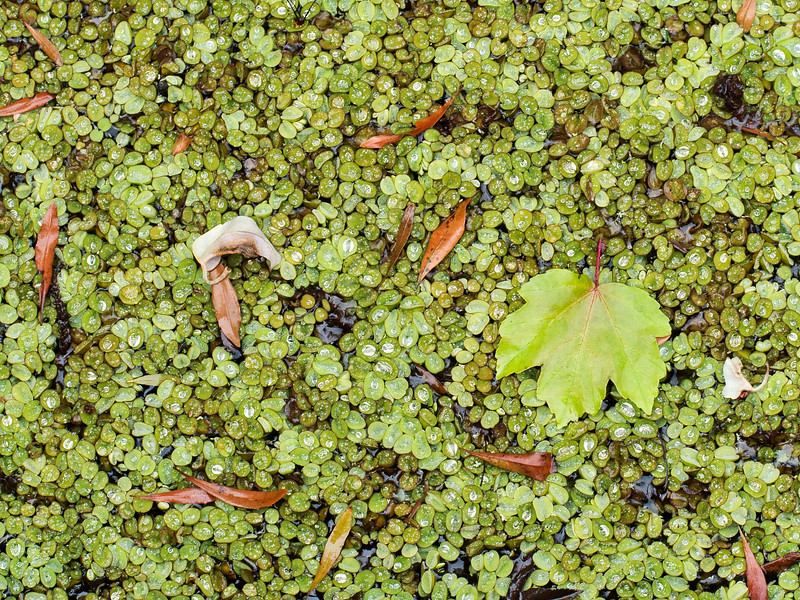 But the larger view was always intriguing. This tree grew over and around a large mollusk shell midden left behind by the Tchefuncte people who lived in the New Orleans area before Europeans. When building roads for oil exploration, the midden was dug out and the roots left exposed. It’s one of the largest cypresses still left in this heavily logged and exploited forest.

So that’s just about it for day one. It was wet, but wonderful. And there’s more to come.

8 thoughts on “The Trees with Knees – Louisiana swamps part 1”