In one of her lovely, chatty comments -N- asked me about kayaking and if I’d do a post about it and so here it is. It’s a little tough to film myself paddling, but I can at least give you a view from the boat and try to write well enough to convey how much I love being on the water.

First of all, I’m a quiet water paddler. Wisconsin is well-known for its rapid rivers and for years the world championship for white water kayaking was held in Wausau, about 45 minutes south of me. There’s a kayaking water park in the center of town on the Wisconsin river. You can camp in the park and have fun in the water. There’s also the Wolf river, the La Crosse and the Flambeau if you want to drive a bit. Many others, too.

For me though, nothing beats still water with no shoreline development.

I started kayaking in 2013 when I still lived in New Hampshire. I’d been a few times with a friend, but didn’t have my own boat until then. I took a day-long course with EMS on basic paddling and rescue techniques and felt pretty good on the water. This is my boat – 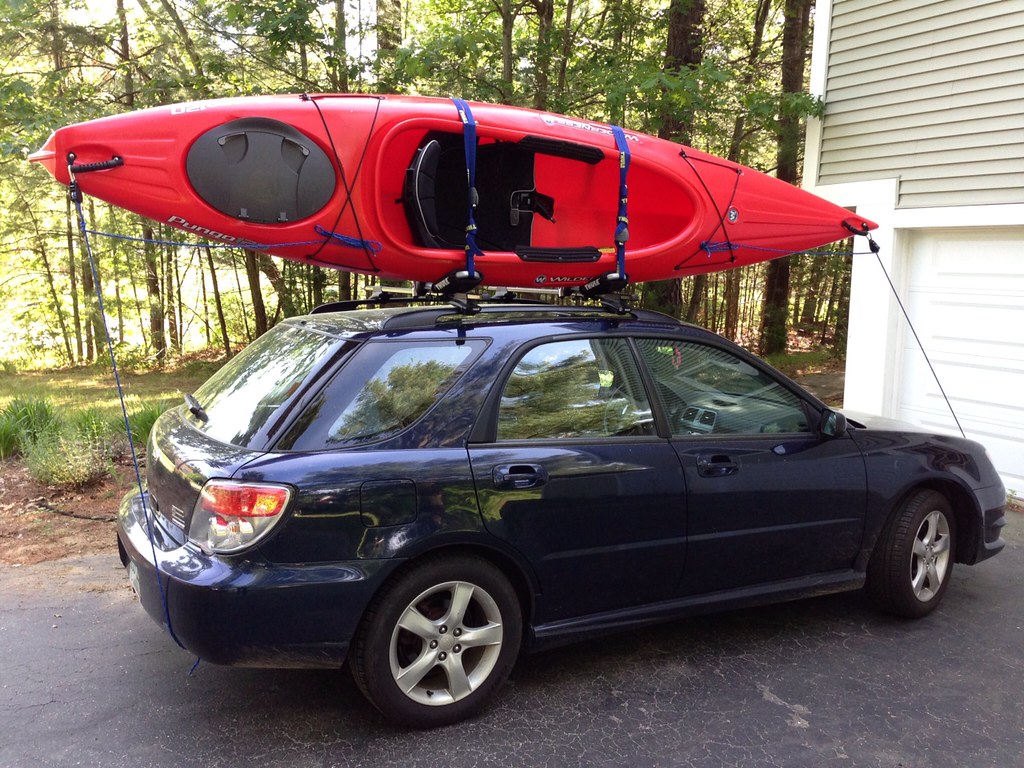 It’s a Wilderness Systems Pungo 120. It’s 12 feet long, 49 pounds and made of heavy duty plastic so it can get hung up on rocks and handle baby rapids. It has a fairly deep keel and so tracks pretty straight for a boat of its type (lovingly called a rec boat which is short for recreational boat; this indicates basically that it’s not a white water craft which is stubby or a sea kayak which is much longer and narrower). It has a detachable dashboard console that fits in the cockpit which is nice because it has cup holders and compartments, but makes it impossible to use a spray skirt. If I get a second boat I’ll get one that weighs less, is maybe a smidge longer and with a smaller cockpit. The seat is adjustable and pretty nice, but I add an  inflatable pillow I occasionally used on the motorcycle. It makes my butt happier so I can go for long stretches in the boat.

The big appeal for me is to see – and be in – nature in a different way. The first time I kayaked in a borrowed boat, my friend and I got very close to some mergansers. I’d never seen them before and from that moment I was hooked. From the vantage of my boat I’ve seen creatures and scenes I never could have from land. Not that I’ll give up hiking, but this is special. It’s different. And sneaky. Many animals will let you get closer or ignore you altogether in a kayak.

This next shot is very special. I was sitting for a while in a shallow backwater. It was quiet and peaceful (except for some ducks partying in the next pond). I rescued a bumblebee and was watching her preen when I heard the familiar thrum of tiny wings. I thought I’d have to be content with kind of a bad shot since she landed in an awkward place for me to get a photo. Then she did this –

That little branch is directly above the bow of my boat at eye level. She’s like 3 feet from me. I had the medium telephoto on (thank the universe!) and so this is hardly cropped. Because the kayak is red, hummingbirds often get curious about it. I don’t have any nectar for them, but I do love their visits.

And on the opposite end of the bird spectrum is this bald eagle that I spooked out of the “eagle tree” on the Spirit. It flew off in lazy circles, taunting me with its unapproachable grandeur. Little did I know I’d almost paddle right by it a few minutes later. Luckily I looked up and it decided it could put up with my presence. I got out of the main flow and into some weeds to hold the boat steady. After a few minutes it took off again and was lost to sight. Even though I see bald eagles on a weekly basis, they never fail to make me gaze in awe and wonder.

Although I haven’t done a lot of remote kayaking so far, I have plans and a list of places I want to go. Certain chain lakes and wildernesses in Wisconsin can only be accessed from the water. An example from the shots above and below is the Spirit River, which I don’t think is officially protected, but since it seems like all the land is private, there’s no way to see it unless you have a boat. Or really like trespassing without the benefit of trails. 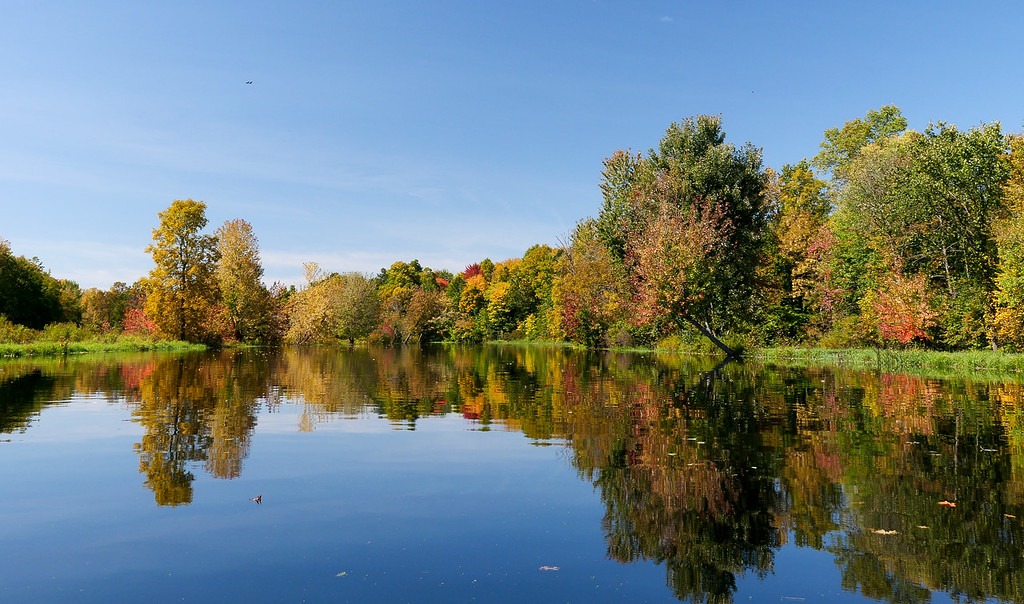 This is the main channel of the river and to the left is the last house on the shore although you can’t see it from the water. From here upstream it’s completely undeveloped for miles. When the river is very high (like it was in 2019), it spills into dozens of secret side channels and inundated woodlands. Like this section I’ve never seen before – 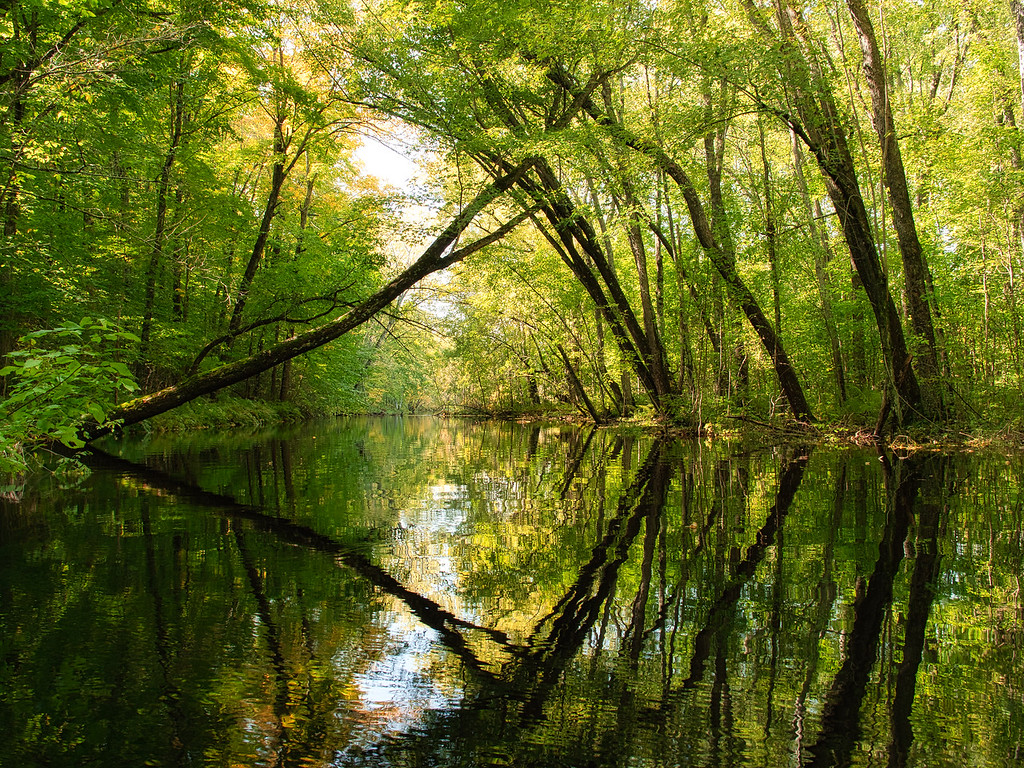 I paddled off the main course a few turns downstream and ended up here. In years past the water has been too low to allow this. I can only hope for heavy rain and snow next year. It’s that frisson of exploration that I love. Finding out what’s around the next bend. Through the break in the trees. Over in that bright clearing.

I know it isn’t reasonable to think I’m the first one to have been in a place, but it feels like it sometimes. And who knows, I might be.

Another benefit of kayaking (and canoeing, too) is that these crafts can get into very shallow and/or vegetation heavy water. Places traditional motorized boats (even ones with very small engines and propellers) can’t go. Sometimes I’ll get off the beaten path and the noisy boats go right by me without the least suspicion I’m near. Sad how much they probably miss on their way to and from wherever they’re in a hurry to get to.

Some people ask where I keep my camera when I’m on the water. My usual routine is to keep it between my legs – lens down, wedged. Attached to the front of the seat is a bottle holder that I use for another lens. Nothing gets terribly wet and if the weather turns and I think things could, I stash everything inside my dry-bag that has a camera insert inside. That slides under the front deck between my feet. I also use a small Pelican case to hold batteries and other essentials that I need to hand. It tucks on the seat between my hip and the side of the boat. I keep all the good batteries lined up in one direction and the dead ones the opposite way so I don’t get them mixed up. The box is also great for holding my car fob. In the past I’d take it off the ring and leave it in the car so it wouldn’t get wet, but with any new car that’s not an option so in the Pelican it goes.

And hey – they match!

The dry-bag is roomy enough for other essentials, too – binoculars, snacks, bug repellent, sunscreen, a third lens, a small towel and even a nature guide book. My cell phone goes into a small waterproof envelope that also floats should it hit the water. The binocs float, too. Not so much my knife. It stays clipped to my PFD (Personal Flotation Device aka life-vest or life-jacket) most of the time, but once I left it in the dashboard and *bloop* over it went. Luckily it wasn’t spendy and my husband bought me a replacement. I use it mainly to cut fishing line. You wouldn’t believe how tangled up this stuff gets and people don’t bother to clean up after themselves, so I do it when I can. I also occasionally retrieve trash and put it where it belongs.

Usually I have the polarizer on the wide-angle zoom because that makes everything pop. All the landscapes in this post were taken with one on the lens. My sunglasses, too, are polarized which is key for seeing below the surface for any lurking stumps, branches or rocks. I have a kayaking and wildlife custom mode set up on my camera that works pretty well. Basically it’s shutter priority with auto-ISO. Sometimes I switch out of that and go with my handheld custom setting. It depends.

Most of the time I wear a PFD, but if it’s hot and humid I sometimes stick it right behind the back of the seat. Especially when I’m in a very calm lake and it’s shallow. Sometimes I can stand up where I paddle no problem, but I can swim so overhead depths don’t scare me. I worry more about the camera in all honesty although I’ve never had a mishap (knock on wood).

Before the start of the 2020 kayak season I might have to buy a new rack or maybe even a trailer for the boat. The Subaru in the picture up there is now 13 years old and starting to be a little rickety. Plus it’s very low to the ground and that has kept me from paddling certain lakes and reaching certain trailheads. The last time I bumped the bottom a little I think I damaged the muffler ’cause now it’s really loud.

The car I’m picking up on Monday is much taller and I don’t know if my current Thule rack will work with the factory side rails. Luckily I have time to figure it out.

Well, what else can I tell you? My time on the water is a joy. I’m going to work on a second post (sparkling) that will feature video since I have taken some over the years. If there’s anything that I should explain or comment on, let me know. Phew. Thanks for reading to the bottom!

More posts about paddling can be found by clicking on the tag ‘kayaking’ below.