I’ve been a nature lover all my life (thanks mom!), but the way nature and ecology are viewed in much of the US today is very different from the way it used to be. I’m not very knowledgeable about it, but in my reading I’ve picked up a few things. Mainly that when Europeans arrived in North and South America, much of the natural world where they came from was gone; subsumed by greed, agriculture and stupidity. So much so that the very dearth of natural environments made people unfamiliar with them and so they came to distrust and outright fear them. Never mind the few animals clinging to what was left, wild places were where supernatural creatures lived and woe to those who tangled with them. Werewolves. Fairies. Demons and witches. Just as real and threatening as the timber wolf they extirpated.

Proper land was built on, farmed and denuded of anything that couldn’t be managed. Our appointed task (so say many religious nut jobs) was to tame the wilderness and shape it for our own use and needs. It was the only way to get some security and constancy in a world that was always changing, beyond our understanding (in many areas) and had ways of killing us around every corner. Control, control, control.

Where am I going with this? That so many natural features and wonders are named for the devil. Case in point is this stunning little waterfall in Rusk county, Wisconsin.

Really? Why? I can’t see anything particularly sinister or evil about it. Maybe from this angle – 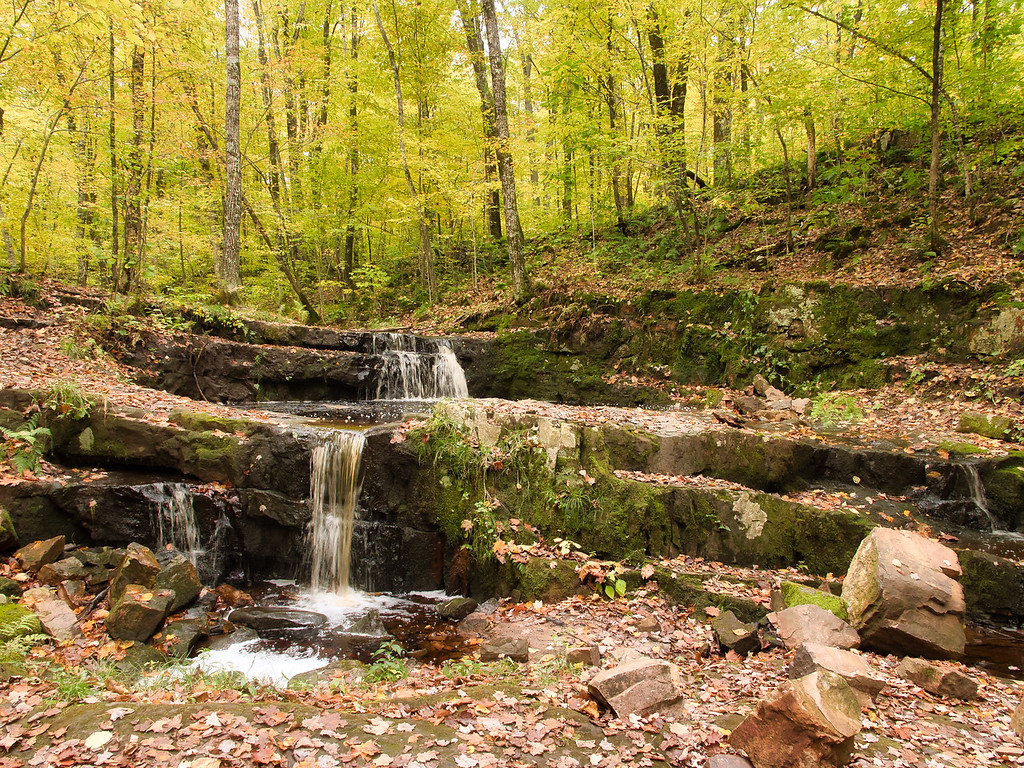 No wait. He must be skulking further up stream – 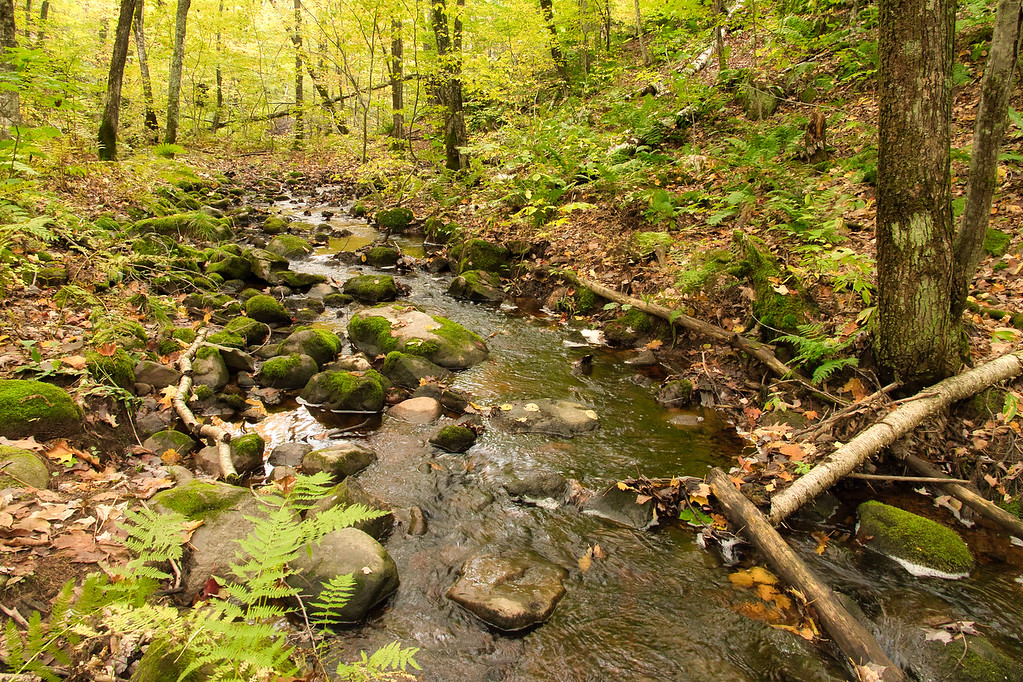 Nope, not there either.

The thing is that tons of places are named for the Devil – The Devil’s Tower, Devil’s Postpile, Devil’s Punchbowl, Devil’s Lake, Devil’s Den, Devil’s Head, Devil’s Golf Course – it’s ubiquitous and I am pretty sick of it and wish we could rename these things. Just substitute Mother Nature and it would be so much better. Or Gaia even. Gaia’s Dike, Gaia’s Kettle, Gaia’s Slide. See?? Better! 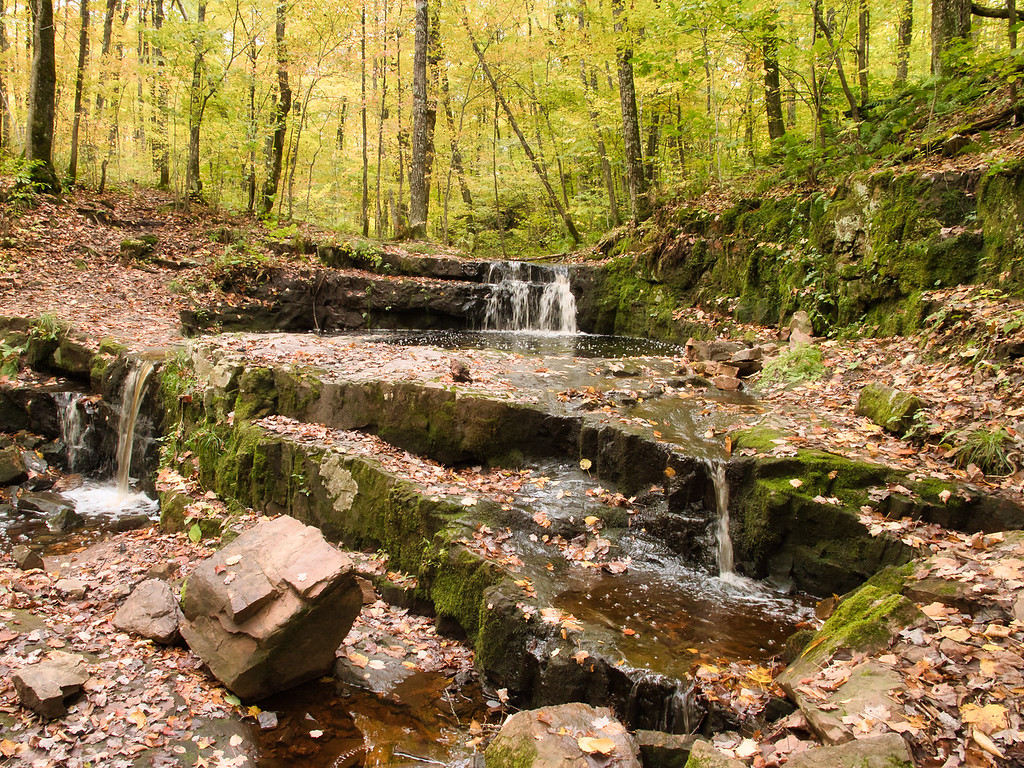 I’ve been looking for a book that goes into the very long and ongoing process of humans coming to appreciate nature. It’s a real thing now – ecology, conservation, natural environments and preserves – all are on the upswing (well, Trump’s blind, ignorant and greedy administration aside). Nature is almost its own ‘religion’ these days. Not with everyone, there are millions who never give the non-human world a second thought, and mostly it’s an interest of rich white people, but it’s getting there. 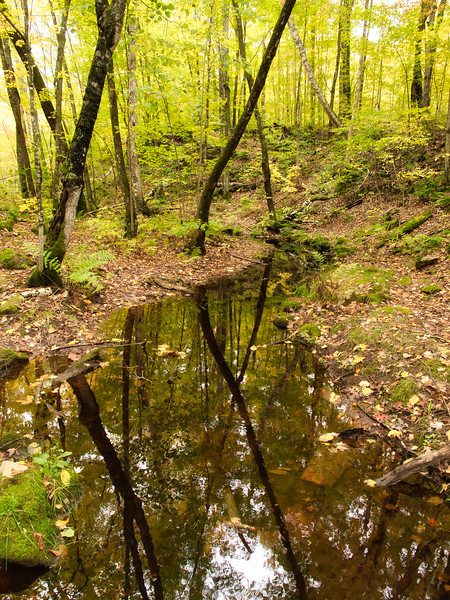 The importance of how the earth functions and provides stability for even the most urbanized landscapes is more understood now. People are less afraid to hike, paddle and explore the places around them. That’s not to say it’s all a big petting zoo out there. Many on our over-populated planet still have to carve out a subsistence on land that has to have the wild driven out of it in order to provide this. Where it exists however, nature still has to be respected and treated with caution. The unprepared, the inexperienced, the stupid and unlucky will occasionally die. But it won’t be the Devil that kills them. Nor Bigfoot. Or the Hodag.

But back to this little waterfall –

It’s in the Blue Hills and was the bonus hike from the Felsenmeer outing. Only a few minutes away by car plus a very quick walk into the woods and we were there. Lucky for us the water was still flowing. A couple of weeks later and it was dry, which is good in a way. The ‘kettle’ is only 18 inches deep or so judging by a picture I saw online. It’s hard to tell from the surface with the water swirling around. When I go back I’ll be sure to bring the tripod for some awesome long-exposure whirlpool action.

The waterway is Rock Creek and further upstream is what’s known as Gundy’s Canyon. Another place I’d like to see one day. I assume there is also a trail, but following the brook could work as well. From what I can tell, it’s not a canyon with two walls, but just one. Kind of a cliff. Like the ones you can see in the background of some of these shots. I have this, the Felsenmeer from last week, another Felsenmeer nearby and some other area preserves on my list so I will have to make a long day of it next year. Maybe in the spring when the water is really rushing.

Speaking of rushing. It stretches the mind to think about how long it took for that bowl to be carved out of the rock. Geological time is so hard for us to get our brains around. Past a couple hundred years or a few generations, it’s tough for us to really feel in tune with.

I’m glad we’re making our peace with the natural world and even letting it be now and again. Helping it to recover from our gross excesses (Cape Cod anyone?). Even coming to love it by supplanting superstitious beliefs with understanding and wonder. Can we drive the Devil out? First we need an old priest and a young priest.

6 thoughts on “A Devilish Situation”