Partly because there are a lot of photos and partly because I don’t know when I’ll next be able to get out with the camera (recovering from surgery on my leg), I’m splitting this post in two. Stretching things so that I don’t run out of material although I still might.

If you got the feeling that I was disappointed in myself with my ‘coverage’ of the mink or chicken ranch; that I didn’t spend enough time or explore fully, you’d be right. I was. I am. The same day though, I did better in a different location. I still didn’t enter the house, but I did walk all over the adjoining property and as a bonus had great light.

This is how I saw it from the road –

I thought that I’d park on the shoulder and walk through the field, but I didn’t have to. The driveway was clear and even had a little turn out or parking area between it and a cornfield. This is what I saw when I got out. Intriguing. To the left an old truck, to the right a collapsed shed. The house is beyond the shed, but there were more surprises. 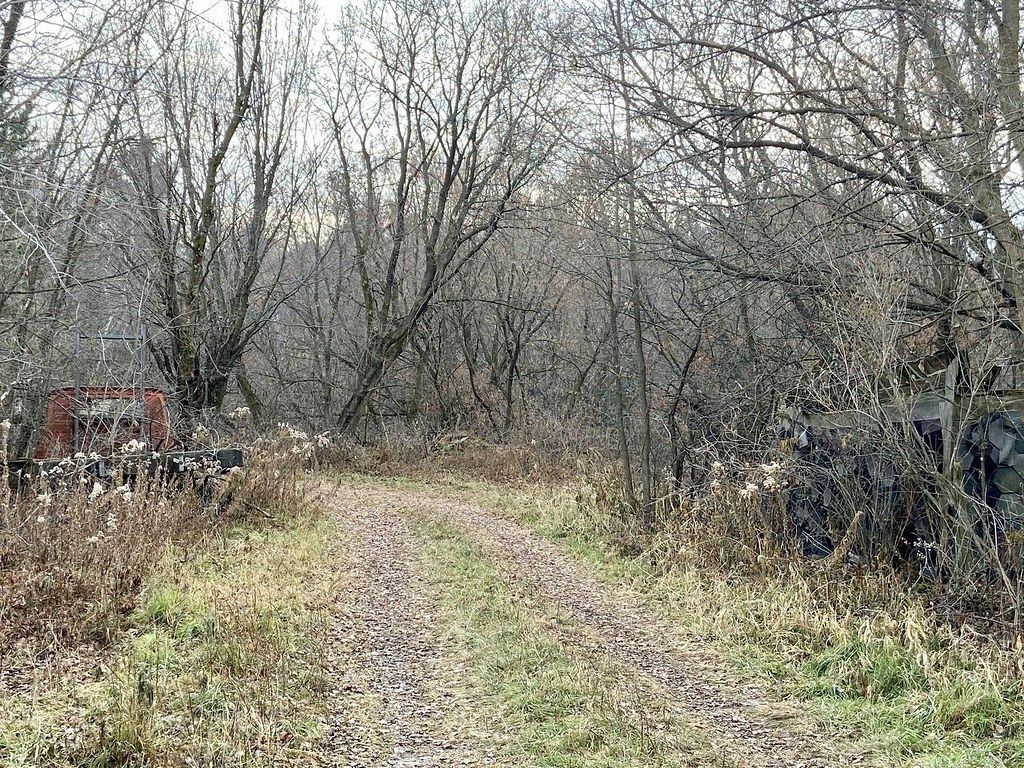 The back yard was much clearer than the front and so, not wanting to fall into an open cistern that I couldn’t see, I stuck to the back. And as you can see, apart from that phone pic above, I used one particular processing style. I based if off a ‘look’ in Luminar Flex and saved it as a User Look so I could apply it to all the photos and tweak it as necessary, which wasn’t much. But enough about that.

The roof is amazing (zinc maybe?) and will go a long way to keeping the structure whole than if it were a tar shingle roof. But there were more surprises. If you stand closer to the house and look into the backyard, this is what you see –

OMG. A car (turned out to be a Pontiac). And an even older house. Or structure anyway. A chinked log cabin. Up close I couldn’t see any of the roof remaining –

So amazing to think that the property was lived on and enjoyed for so many years. Too bad no one saw fit to preserve the original building though. Or what might have been the original building. There is a small river or stream running behind although I didn’t get too near it because there seemed to be a dump back there and I didn’t want to chance stepping on something I shouldn’t. Plus I could hear dogs in the distance and wasn’t sure if they were getting closer or just louder. Anyway…back to the house.

I should have gotten a shot of the back porch – there’s a stack of firewood and a gas grill on it along with an old door, some tools and a Keep Out sign. Next to it though was this –

A creepy cellar door whose stairs are almost obliterated, but who some kindly soul had decorated with old beer cans. So cheery. Check out the collapsing foundation stones. Yikes. Even with a nice roof, the end for this house could easily come faster with this problem.

Having noticed the windows were boarded up on the other sides, I was surprised to find these two open. Now they look onto a hay field and probably always have done.

This is such a typical example of rural housing built in probably the 1930s. There are little details here and there (like at the bottom of the window there), but mostly it’s a plain, sturdy and probably very serviceable little house.

I took my leave of it and headed further down the driveway that snaked away and toward the river and treasures beyond.

If the dogs hadn’t alerted anyone to my presence, I still had time to discover them.