In the world of HDR and the over-saturation of not just images themselves, but of pictures in general, it can be hard to appreciate the subtle landscape.

With this set I also want to talk about taking advantage of the moment and how very small things can make a big difference. For me it means slowing down and photographing conditions immediately – don’t wait! The very thing that draws you to a scene, makes it interesting and compelling may disappear at any moment! Catch it while you can.

This first scene is one that captures my attention every time I pass by. It is a small marsh made by industrious beavers and though I’m not sure any still live in it, there are ducks, herons and other wildlife that take advantage. The dam, though breached, is still in place and is pretty tall so I got on top of it for this shot, but I almost didn’t. I had another goal in mind for the day and thought that I’d snag this shot on the way back to the car. Then it occurred to me that the snow wouldn’t last and it’s the snow that makes this picture work. It gives it depth, texture and much-needed contrast. Otherwise it’s pretty blah.

Same with my favorite aspen grove. When I came back through there was nothing but mud and that wouldn’t have worked in color (what little there was) never mind black and white. One thing I think you really need in a mono image is pure black and pure white, not just gray.

As I said at the beginning, I had a specific goal in mind for the day and sometimes I get rather fixated on that to the point that I can’t see much else. That goal was this brook in winter and you know how I love a good brook in winter. But alas, it isn’t as easy to work with or as photogenic as Ripley Creek and I ended up with one image that I thought was decent enough to process. So in hindsight, those first two shots, the marsh and the aspen grove,  ended up being the most successful landscapes of the day.

Oh and check out the name of that shot there. Here’s a tip – don’t put your lens cap in the same pocket with other gear you need. I ended up tangling my lens cap in my remote shutter cord and plop! Into the water it went. And because it’s so darn tannic, I lost sight of it almost immediately. I dashed downstream a bit, hoping I was on solid ground and not just ice, knelt and leaned over the water hoping for another glimpse of it. No dice. I looked and looked then decided that I should go to a spot where it was really shallow. As luck would have it, I found it hung up on a rock just breaking the surface. Snag! Oh sure, it’s just a cheap item, but damn I hate losing stuff on account of my own carelessness. Back into a pocket by itself. Lesson learned.

When it snowed in early April I got my butt in gear and got out into the woods because it was incredibly beautiful and because I was feeling a bit of photographer’s guilt for having ignored this beauty earlier in the season. It was time to just be outside and appreciate the scenery for all its subtle glory. The snow on the limbs, the scrim of it on the ground and the contrast with the tree trunks and the vernal pools – there had to be some good pictures in there somewhere!

Using trees for anchors, I walked around and around looking at different compositions. When the sun broke through, it provided just that little bit of light that pulls your eye into an image if it also has balance and a pathway for your eyes. The scene below I’ve shot before in similar conditions, but it’s so inviting that I had to do it again. The break in the trees at the back of the image is easily arrived at by the closer ones to the side keeping your eyes in frame, and also the rock that fixes your attention.

As I walked into the scene I wanted to use that rock again, but this time as an anchor. With landscapes like this, I think you have to pay particular attention to composition and framing. Color and bold forms can sometimes be overwhelming in a picture that otherwise might not have strong compositional elements. Our brains light up so much for loud colors and bright light that it can make a weak image strong. Not so with the subtle landscape and I find working with them makes me more methodical and less overwhelmed. I make better decisions and come up with better images for having taken my time and used my head.

That doesn’t end when I get them into Lightroom. Showing restraint with the sliders keeps the image from being too intense, too different from what I experienced. Especially when the light is so delicate. Be cautious and adopt Coco Chanel’s fashion advice, but with your processing. She said that before you leave the house, look in the mirror and remove one accessory. I keep this in mind and just when I think the image is done, I take a look at before and after to make sure I haven’t taken things too far. If I have, I remove one thing. 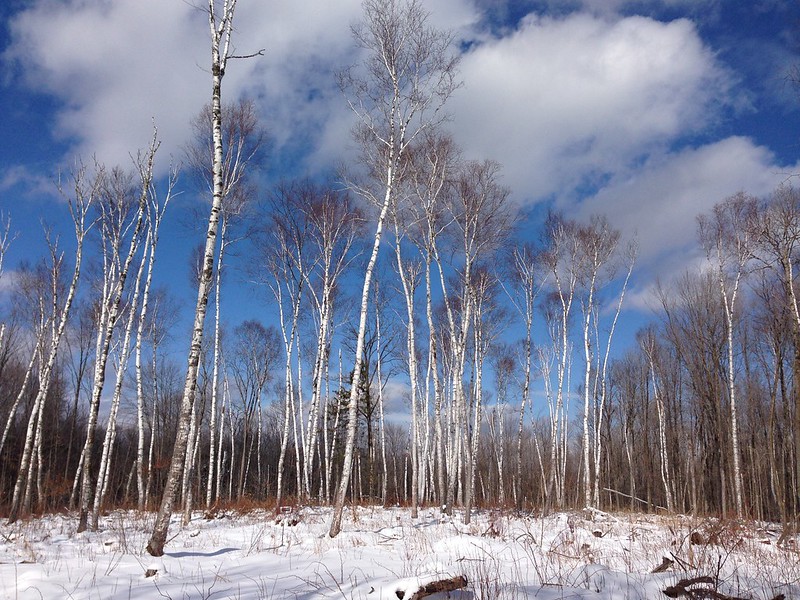 It’s obvious why I stopped and took it. That sky, those trees, the perfection of the day – they all worked on me to amp up my joy of being outdoors. But technically the photo is pretty lousy. If not for the sky, would you have looked? Would you have stopped?

4 thoughts on “In praise of the subtle landscape”