Wow! I got this done really early this year. Some years I haven’t even bothered to come up with my best or favorite shots for the year. What has gotten into me? They are presented in chronological order.

So like other years some of my favorite images aren’t technically wonderful or outstanding, but are moments of serendipity and good luck. Some are technically good and took a lot of work or know how for me to achieve and so I’m proud of them for those reasons as well as the final image. 2017 wasn’t an adventurous year for me, but I still found some pretty great things to stand in front of.

This gorgeous barn starts us off. I’d passed by it without seeing it a few times, but then the GPS showed me a different route home and once I saw it I knew I’d go back. When I did it was pretty overcast, but while I was walking on top of the snowbank the sun broke through just a little and gave me some lovely texture and shadow that I think makes this shot stand out from all the other rural architecture photos I’ve done this year. 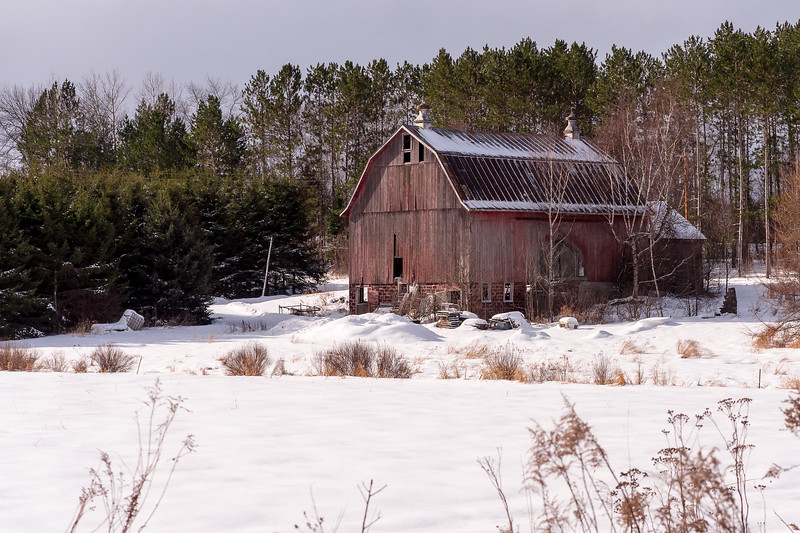 Searching in your own time

One of my newfound loves is abandonment. We have tons of it up in the northern part of the state, but not all of it is easy to see. I’d passed by this little cabin dozens of times without noticing it, but when I did I stopped, stood on the double yellows and took this shot. To me it seems especially desolate and I like how twisted the little building is. Soon it will be one with the earth. And funny – even though I know approximately where it is and have looked, I’ve never seen it again.

Ripley Creek feeds into the Wisconsin river just south of my house. I can hit the parking lot for this nature preserve in 8 minutes. It’s beautiful as well as handy and so it’s no wonder that three shots of it made this list. First comes this one from atop one of the bridges that crosses the creek. I remember having to stretch my tripod to its tallest height to get those fallen trees in the foreground and I think they make the shot by giving it a fabulous anchor to that depth.

Hey look, more water! This was a great outing – a trip to the U.P. and the Black River. All along the access road are small parking lots and pathways to the river (sometimes big, elaborate wooden ones that trace down the gorge). While many views are limited to just platforms and small sections of riverbank, the Sandstone falls area is much more open and I got to wander over the icy boulders to get this shot (yay for microspikes!). The falls themselves aren’t all that dramatic here, but the light was great, the day was perfect and the image is one I look at and smile.

And more Black river. This was a handheld shot from a platform. I think I was leaning down the railing and holding the camera below me. However I got it, I just love this image for its power and beauty. The cliff walls really are that color and the river was still partially open which made even more of a color contrast with the hundreds of cedar trees clinging to the sandstone face. I also like that I found ways to shoot the river that aren’t the traditional long exposure so preferred by me a lot of the time as well as other photographers.

As I said in my post about this photo, sometimes a single-minded approach to an outing or session can blind you to the possibilities in your location. This scene literally fell apart and became bland and uninteresting after the snow melted, so if I’d waited until I got what I set out to shoot, I’d have been too late. Having the presence of mind to climb up on a beaver dam to get the shot was only the beginning. The processing was just as important and I spent a comparatively long time cropping and working the image to get it to its best presentation. It’s a quiet image, but I love it.

2017 was the year I finally tackled my idea of photographing vernal pools. The land across the street from my house is full of them and so it was convenient and beautiful. Here is one of the first images in the series. I love it for its ethereal beauty and depth. The light was gentle in the early morning and lit the scene perfectly.

The day I took these next photos is one of my favorite memories of the spring. Both shots combine my knowledge and experience and also luck and observation. Blood and Rattlesnakes came about when I looked back up the trail into the sun and saw this little group of blood root backlit. The fallen log they are growing near provided the best backdrop I could hope for!

I thought this was rue anemone, a relatively rare flower, but it’s not. Judging by the name I’m not the first person to be fooled. There weren’t many open flowers, but there were a lot of buds. I kept looking through and found this little trio. I remember having to position the tripod and the camera very precisely and it took quite a few tries. I really wanted a sunlit shot so there would be shadows and texture so I kept my eye on the clouds. Then, of course, whenever Kris gets ready to shoot a macro, there’s a monsoon. Waiting for the wind to die down was torture!!! But look! The plane of focus is even across the buds and the blossom and the whole thing just works.

One of the really great things about living on the river and in the river valley is the enormous number of dragonflies in early summer. Hordes of larvae emerge from the water around Memorial day, but some species appear a little later. This one is a fawn darner (boyeria vinosa) and I found it by Ripley Creek. The stick it crawled up on to shed its nymph exoskeleton was very isolated and so provide a really smooth background to separate the insect even more. I didn’t go to Ripley Creek for this shot, but what a bonus!!

This is what I went to Ripley Creek for! On all my previous visits to this marvelous place I eyed this bit of embankment with a big tree down across the brook at a bend. I even shot the brook looking the other way from just about this spot, but that was in winter. The conditions had never been right to get this summery shot, but then one day it was perfect. As luck would have it we had a very rainy, wet spring so the water was running strong. I look higher off the ground than I was, but the view is fabulous anyway. The tripod is balanced on the tree trunk and I’m standing sort of on the roots. The light was great and I think this might be my favorite photo of the year.

Being new to Wisconsin, I spend a lot of time looking at the differences in nature, landscape and climate between here and NH where I’m from. One of the biggest is the understory in the forest – the plants are very different. So far there have been no laurels or blueberries where I’ve explored, two things abundant in New England. Instead sometimes there are grasses and in this case, tiny maple trees that made such a beautiful carpet that I had to stop while hiking Devil’s Lake and do some long exposure work with the foliage in the taller trees. It is a nice example of serendipity, a previously unrealized idea and my knowledge and experience. Not too shabby.

As I’ve written about before, sometimes your own yard can yield some of your best photos. This year I bought some mums for the front steps and then discovered a few hover flies had died on it. Naturally I got out the macro lens. When I first noticed it, I thought it was a small bee because of the white markings. Upon further investigation I found out that this is actually a fungus and one very specific to flies. It’s called Entomophthora muscae or fly death fungus. It is not, as you might suppose, a fungus that infests the fly after death, instead it causes death. Fascinating and a little scary. You can read about it here. I like this shot for its color, crisp focus, bokeh and use of negative space, something I try to work with in my images.

What set of favorite photos doesn’t include some from everyone’s favorite season – autumn? I love being in the woods just about any time, but fall is magical. It’s crisp. There are fewer bugs. The light in the leaves is amazing. It smells good. Walking there infuses me with well-being. That’s what I try to convey with shots like this next one. I’ve improved my ability to take sun-dappled forest shots and have also learned a lot about processing to make these sing even louder. I almost wish it could be autumn all the time.

Oh boy. Are you sick of Ripley Creek yet? I promise to try to find another picturesque brook. I’ve been looking. But in the mean time I keep visiting what’s become my surrogate back yard. On this time out it was fall and I meant to find color, but it wasn’t there to be found. So, keeping in mind that things change I decided to go for something else and when I saw this big log on the bank, my series was born. I feel this is the strongest of the set and like how odd the forest background appears even though I didn’t do anything in post to make it look that way. I think this year might have the most black and white images included in my final picks.

It’s a simple image and didn’t take much effort to produce, but maybe that’s its appeal. Whatever it is, single leaves in snow have always been a favorite subject of mine (ok, a single oak leaf on anything!). This one is especially nice since it landed on a pristine background and got kissed by a gentle sprinkle of powder. I love how it accentuates its pointiness and how gently curved it is.

So that’s it. That’s my list. The images I worked hardest at. Had the best luck for. The ones that came together in the field and in the computer. If you’ve put together a gallery or blog post with your best of 2017, feel free to drop a link in a comment. And Happy New Year!