Last year our wine geek group went to Argentina, this year it was Portugal. The plan was to visit a few distinct regions and see what they’re doing with table wine. Of course we’d be tasting port, too. They don’t let you leave unless you do.

Our first stop was Sintra, a town of historic importance about 30 minutes outside of Lisbon. It was an adventure getting there since our driver brought us to the wrong hotel at first. Good thing I had our itinerary on the iPad and we got it straightened out quickly. This was the right one –

I took that shot on our second day after exploring Quinta da Regaleira (well, as much as one can in just a couple of hours). The name derives from a family that held the land for a long time with the last owner being Viscountess of Regaleira. It’s humble compared to Versailles, but I found it a pretty staggering testament to wealth, privilege and a twisted imagination. Here’s the view of town from one of the many towers –

The gardens at are built on and into hills which makes it hard to take in all at once. Paths, tunnels, caves, stairs lead all over – to little groves, to initiation wells, to lakes and chapels. The whole thing is the brainchild of António Augusto Carvalho Monteiro, who in addition to being very rich (his nickname was Monteiro the Millionaire) and traditionally educated (law degree), was a bit of a nutter. He believed in mysticism, alchemy and signs and portents, especially those associated with the Masons and the Knights Templar. The guy would have really been into Dan Brown books. This quinta and even his tomb was designed and built with a ton of arcane symbols and design specs dictated by Masonic rules. It’s crazy and really fun. Here are some of my favorite shots from the time I spent there –

This is the main route up the hills to the palaces on the top – the Pena and the Moorish. We didn’t have the time or the energy to go, but I would have liked to.

Instead of sticking to the main path, I took detours and side routes. They were far more enchanting and strange. My companions seemed to agree! At times it felt like we were robbers trying to find a way to scale the palace walls and steal the jewels. So fun. We laughed like crazy.

Mysterious doors and stairs just begged to be explored. Alas, it was locked! 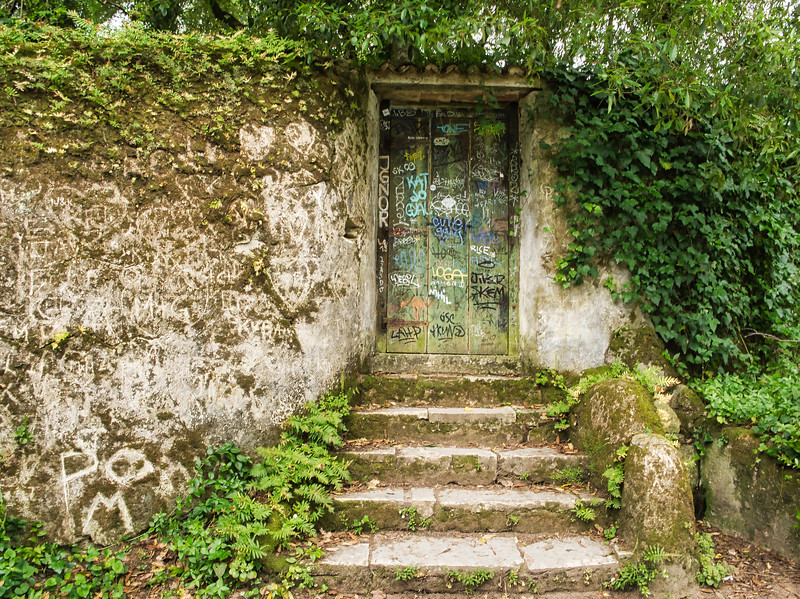 The whole thing is full of grottoes, niches and odd little bowers. 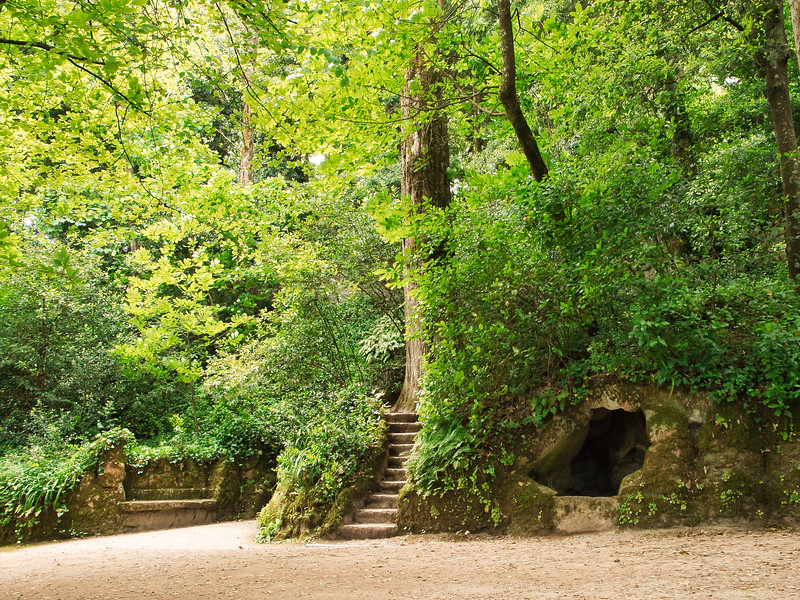 One of the main attractions are the Initiation wells. There are two of these and they weren’t for collecting water. They were used in Masonic rites involving the tarot and probably guys in creepy wigs with aprons. One is very fancy and has a 27-meter spiral staircase with several small landings. The spacing of these landings, combined with the number of steps in the stairs, are linked to Tarot mysticism. 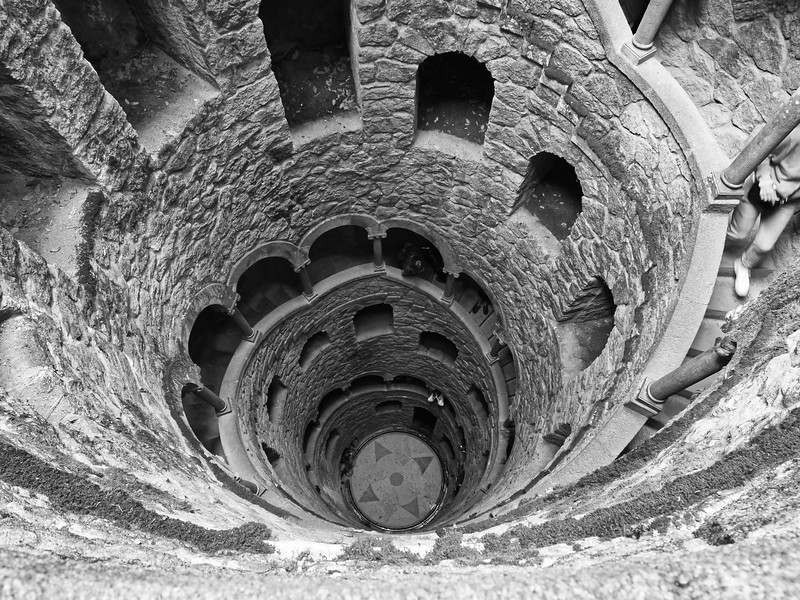 These two photos show why they are also called inverted towers.

The other one is rougher and is called the Unfinished Well. From below you can use tunnels to go from one to the other. 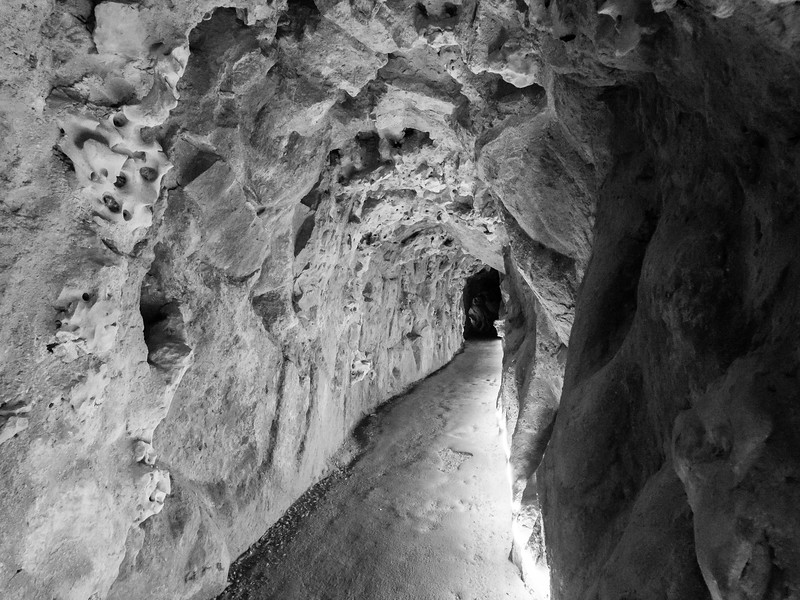 The Unfinished well has straight stairs that connect a series of ring-shaped floors to one another. They are unbelievably steep and narrow and worn from decades of feet. You can see a person in one of the openings in this shot – 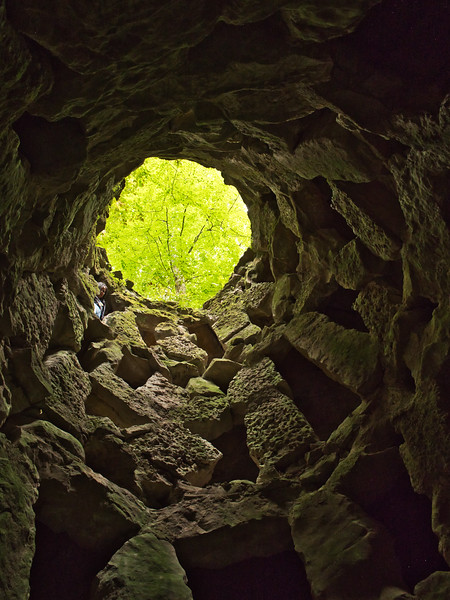 The tunnels snake out to other places like the Labyrinth Grotto and the Waterfall lake.

and from the outside –

And the completely artificial Waterfall lake – 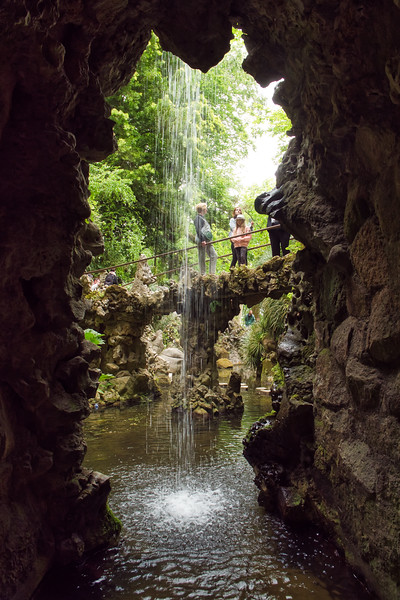 So you want to see the palace itself, huh? Well ok.

This pathway is called something like the Path of the Gods because it has that line of statues on the left – all of Greek gods.

We toured inside the one floor that is open to visitors. It was a strange mish-mash of styles and I don’t think any of the rooms was presented the way it was used by the builder, but it was interesting. There were a lot of people crammed in so the photos aren’t optimal. 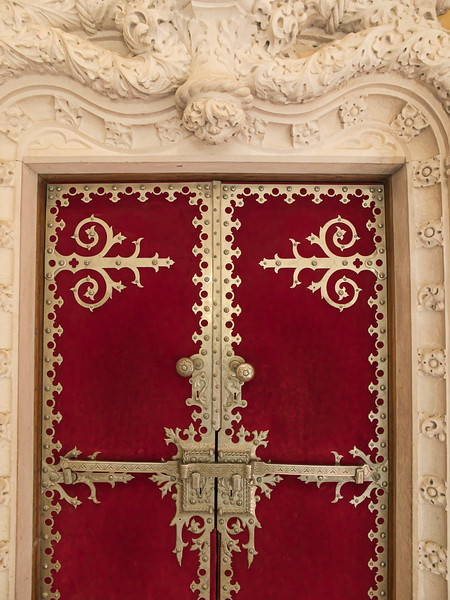 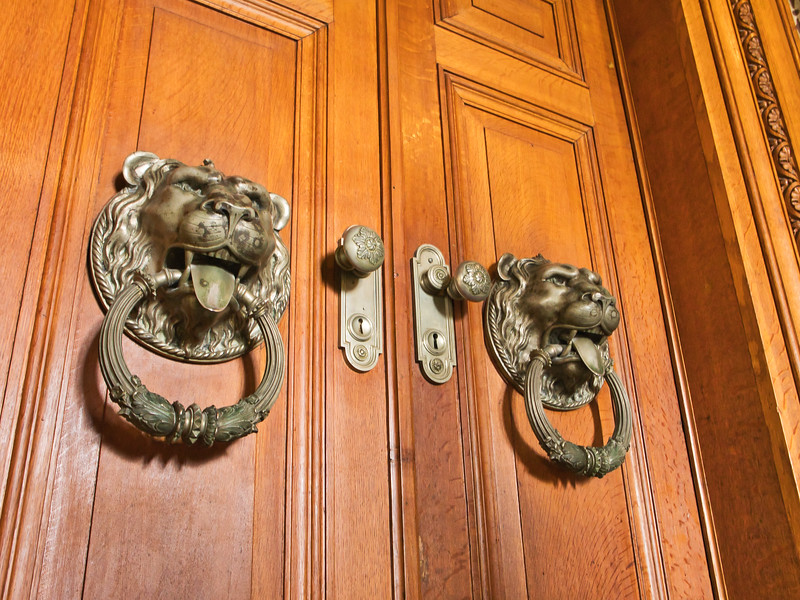 In search of lunch and wine, we walked back up to the hotel, passing by the outer walls of the estate. 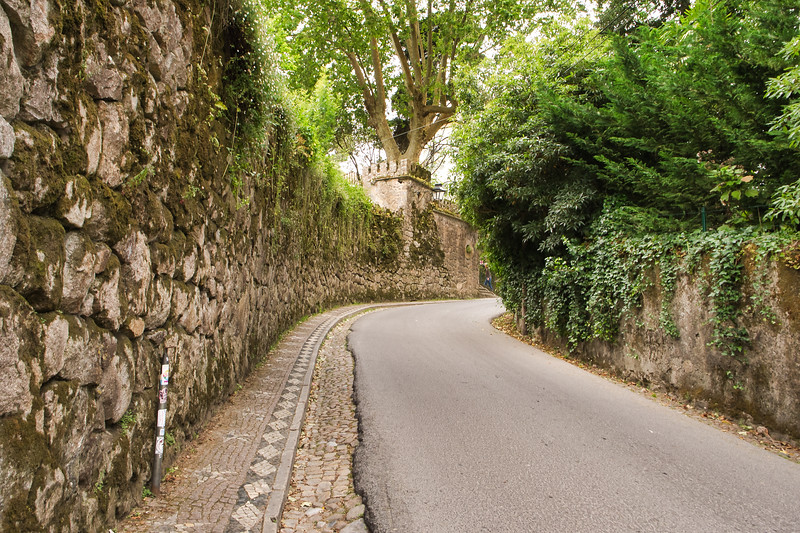 Well that’s it for the first post. There are more shots in this gallery if you haven’t had enough. Long post, I know, but it was such a strange and beautiful estate that I went a little nuts. I have hundreds of photos yet to go through and process. We went north to the Douro river valley (we took a boat cruise) and also to Porto. Lots of food, wineries and beautiful scenery coming up.