GAH! Scheduling error. This was supposed to go up on Sunday the 19th. Not sure if I can get one together for that day so we’ll have to see. I hate it when I have a dumb. Anyway…on with the Falls.

Toward the end of March I started watching the weather for a day to head up north to do some waterfall work. I had a pretty good plan and had several grouped together on Google maps and when the weather called for mostly cloudy with a 20% chance of rain, I headed out. My husband came with since he had the time and hadn’t seen any of the places I planned to go.

Well they say that if you want the gods to laugh, make plans.

The clouds didn’t appear. They totally burned off and the temps rose making for a gorgeous day, but not one for slow exposures. So I improvised!!

My first stop was Potato Falls, which in retrospect, I can cross off my list for the cloudy day. Like the gorges at Copper Falls, they’re steep, dangerous and barricaded off. Good for public safety, bad for creative photography. Up on the cliff by the upper falls, I cranked the shutter speed in the opposite direction since the sun was so bright. I rarely do high shutter speed stuff with water and I don’t know why. It’s awesome! Of course you do end up with a lot of photos that are nearly identical and it can take time to go through them. I picked some of the most interesting ones to process.

Freezing action like this not only lets us see some crazy shapes, but it also conveys the power of the river in a way that long exposures just don’t do.

Black and white processing ended up being pretty good for some of them.

Then we visited lower falls, but I didn’t shoot anything except all the stairs we had to climb! 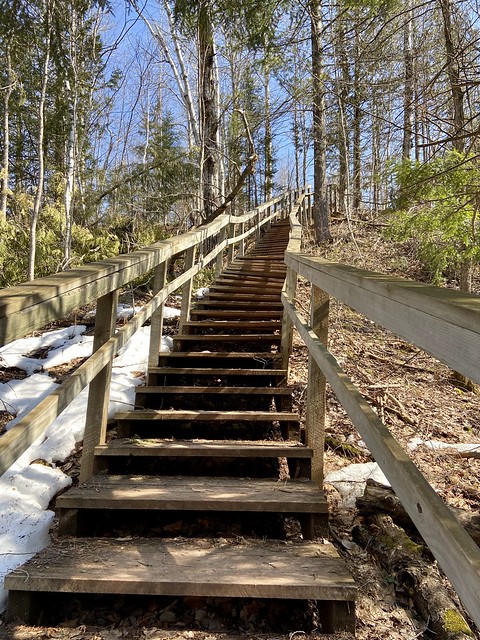 The ones in the sun were MUCH easier. By this time the snow was packed, melted and slippery. 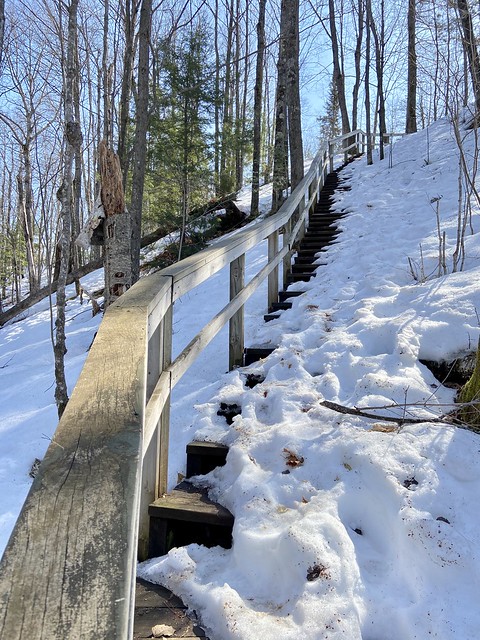 After driving around looking for some of the other falls and being blocked by unplowed roads still too deep in snow to risk, we decided to head to Copper Falls State Park instead. Yeah, so did a lot of other people. What I saw wasn’t as destructive as what happened in the southern part of the state so hopefully the northern parks will stay open and the assholes will stay out.

Anyway, there aren’t many ways to shoot the falls, but they are impressive and we had quite a time not breaking our necks on the steep and very icy stairs. Should have brought the spikes, but hubby left his pack in the car and the spikes were in his pack. We made it though. No broken bones.

I was dubious of shooting waterfalls in full sun, but surprise, surprise, I don’t hate them.

The paths that got sun were way less treacherous!

By this time I had my coat tied around my waist it was so warm!

The rivers are amazing and were in full roar. The people we did meet on the trail mostly kept the proper distances and everyone seemed to be enjoying the day.

I shot some video on the phone and with the G9, but don’t have the bandwidth to deal with any of it right now. I usually have to go to the library to use the WiFi to post video (even from the phone) so that’s out for now. The videos came out really well though, so I’ll put together a post as soon as I can.

I love this next shot because it has so much going on in addition to just what an astounding vista it is. Your eyes will be drawn to those spots of red in the upper left – two people! Now you have some scale for this. Check out the trees jammed into the bottom of the gorge. Aren’t those cliffs fabulous? The cedars cling to them like moss. And then there’s the rainbow in the mist. It’s direct sun, but I still think it’s a decent landscape.

So even though the conditions didn’t turn out how I wanted, I still had a great day with my hubby seeing some of the best nature Wisconsin has to offer.

3 thoughts on “The falls fall through”