Google maps has this cool feature – you can save a location and make lists of locations. I love this and use it to mark places I want to visit. I have one of Old Growth Forests, Places to Paddle and Northern Waterfalls. This post is about one from that list.

Like the last time I headed up for some long exposure work, the sun came out. But at least it waited a little while to do it.

My husband came with me and I randomly decided on Wren Falls and let Google Maps take over directions via CarPlay. All well and good until we got up there and lost cellular reception, but it turned out ok. We got to test the tires in some mud and giant puddles. And we found a gold mine. But I’m getting ahead of myself.

The way to these falls is pretty well marked with signs helpfully pointing the way. The area is HEAVILY logged so most of the roads are solid and fairly wide. Most of them. Again, glad for the Jeep and the hydraulic suspension!!

Here’s the view from the top of the falls – 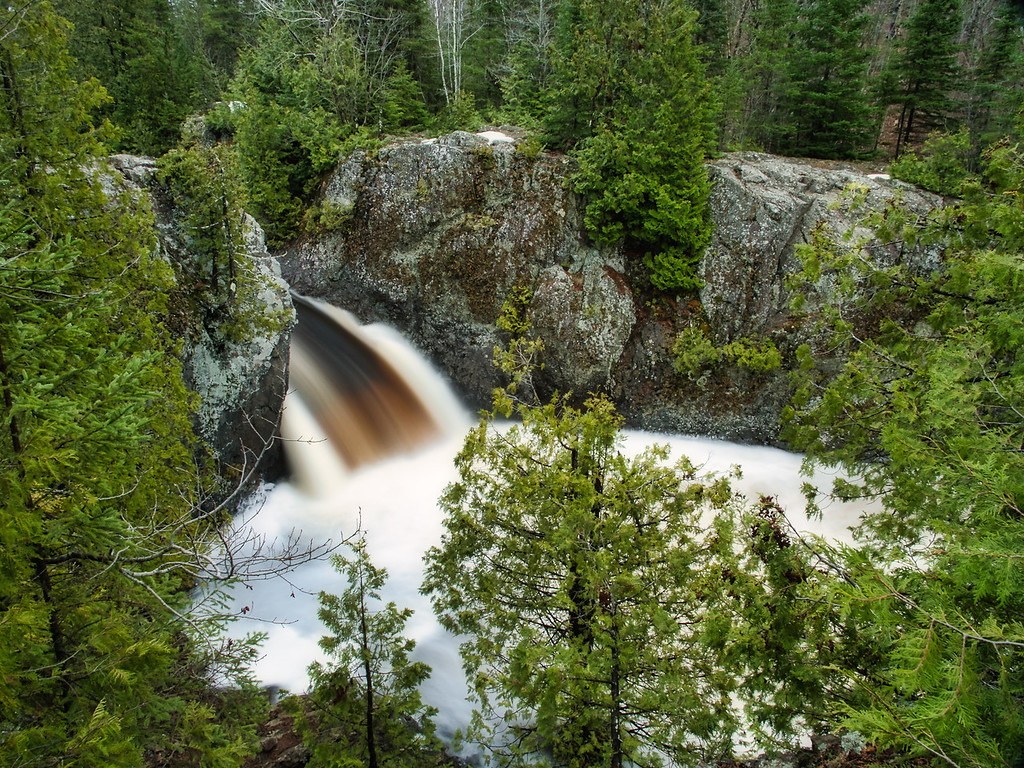 Luckily this isn’t the only view although the others require more work (and going off trail). Speaking of trail, I’m glad I went this year. There’s a new bridge over the river. It’s a tribute to a member of the Heritage Chapter of the North Country Trail Alliance, Bill Thomas. Not only is it a well-constructed bridge, it’s completely necessary since it’s the only way over the Tyler Forks River in this area. 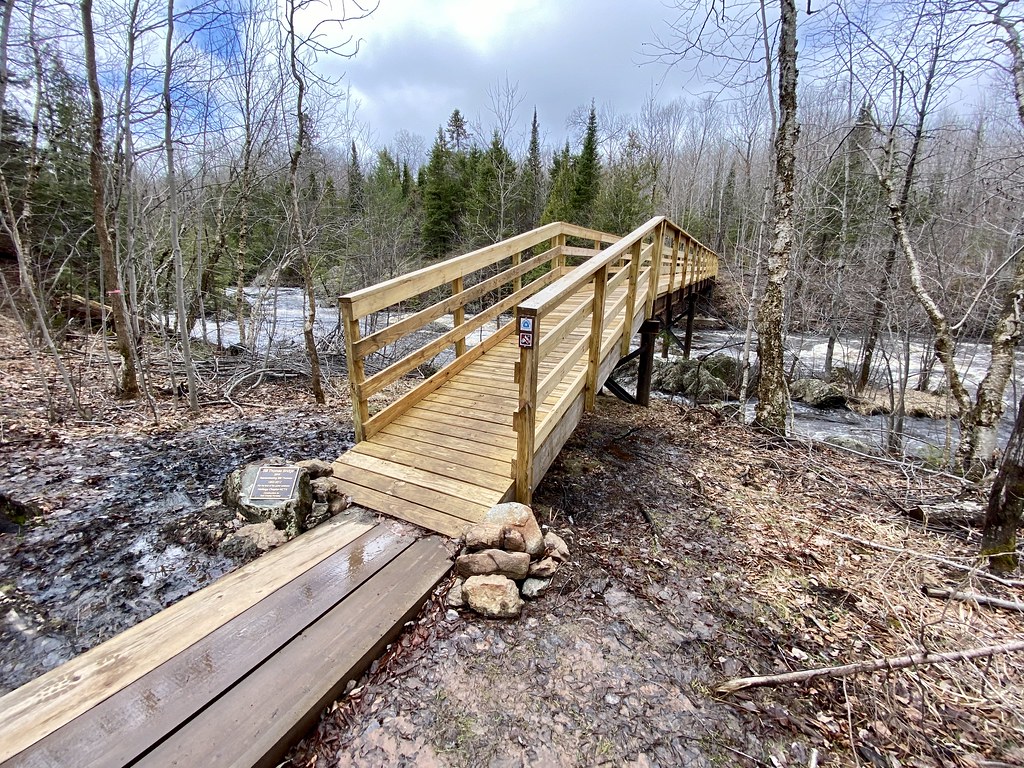 Prior to the bridge construction, the trails here were an out and back segment of the North Country National Scenic Trail which initially ran from New York state to North Dakota, but has been recently extended into Vermont, possibly for an eventual connection to the Appalachian Trail. It is an impressive 4600 miles long.

Up on the left is the side of the river that was accessible from the trailhead and on the right you can see a point of rock sticking out with a cedar tree on it. That’s where I’d park myself for these next images. I played with faster shutter speeds because I really like how it shows different patterns in the water. So much more interesting in this roaring river than longer speeds that basically blur those down to nothing. Here’s a shot of that same cedar tree and the strip of granite ledge that you can see from the bridge –

I got a little playful with the processing here. The light was changing almost minute-by-minute and I wasn’t sure if I’d have enough clouds to continue.

Although the trial is still under construction, it’s marked by pink surveyor’s tape and is easy to follow. It gets very wet around the bend where the falls are. It veers away from the river in an attempt to find drier turf. Not much luck, but some. Probably bridges or planks will be placed where it’s always muddy or wet. There is no good view of the falls themselves from up on the opposite ledge. Mostly it’s due to a major U-turn in the river itself where bluffs block the view, but also due to trees growing on and at the bottom of the ledge that you stand on. But I found a way. First by going off trail to a high vantage and framing through branches.

Short shutter speed = handheld. At tripod level the falls were just too hard to see behind the tangle of branches. So down the bluff I went. Luckily there is a safe way to get down. It is very wet this time of year, however, and there are seasonal runoff streams everywhere. But it was worth the effort.

I had the tripod basically on the ground and it was the only way to get most of the tree branches out of the way, but once I was down there I found another great view. By this time the sun was breaking through in earnest. I love the light in this first shot. See how different it is to the second.

From here you can see between the cliffs to the new bridge. The cliff on the right is the one that primarily blocks the view when you’re standing on the top of the one on the left. Getting the tripod even lower I got this, which I think is my favorite from the series.

I think the power and flow of the river comes through with these shorter exposures – 1 to 2 seconds or even less. Plus there are all those great striations of light and dark in the water itself. It can be a little hit or miss since the surface of the water continually changes, but it’s a lot of fun to play with. It was so bright that I used a neutral density filter and a polarizer to achieve these effects.

Going back the way we came, my husband and I stopped at the top of the cliff where you could get the only easy view of the falls there is –

This is basically at the top of the bank on the right in the shots above. There are no ropes or barriers so you have to be careful with your footing. These are unbelievably powerful rapids and I’m not sure you’d survive if you fell in.

These falls are remote indeed, but there are many nearby and I’m sure I’ll be visiting them, too. I tried to get to one more on the day I shot at Wren, but the light was failing and the road was bad. Had the light stayed overcast I probably would have risked it, but it will have to be for another time. There are plenty of falls to explore.

Instead we stopped where a trial intersected the road we were on. It was the National Scenic Trail and we discovered that it is the section that leads to Wren Falls. If we’d kept going on the newly constructed trail we were on at the falls, this is where we’d come to. We decided to walk it for a little while. Lots of little bridges and creeks along the way.

That last shot is at the back of a gold mine, but that’s for another post.

One thought on “Wren Falls”