Another place in the park that hardly anyone visits is The Cinder Cone. While Lassen Peak itself last erupted a mere 100 years ago, this volcano has been quiet for about 400 years. A blink of an eye in geological time. Lassen and the surrounding mountains make up the southern-most end of the Cascade range. The most famous volcano in the range is Mount St. Helens and the staggering pyroclastic flow of 1980 and its most recent little burp in 2008. I remember the one from when I was a kid, but don’t remember the most recent. Lassen park is still highly active with similar features to Yellowstone although the Cinder cone isn’t one of them.

Before I get to the actual hike let’s make a few stops on the way in (yes, that’s the trail there and I did go all the way to the top).

These aspens made me stop and wander off the road with the camera. The backlighting. The shadows. It was entrancing.

There were more lovely trees on the path to the cone and I stopped for this one. The trail itself is loose ash and cinders and is like walking on the beach. It drains energy from each step and isn’t fun in hiking boots.

The back drop for this one is the edge of the lava flow that came from the cinder cone in the 1600s. Early explorers and scientists thought it was formed in the 1800s, but modern technology has pinned it at around 1650. Later in the post you can see the field from up top. It’s amazing and this is where it came to a stand still. I think the pine is a ponderosa. When we came back a couple hours later, the earth turned and the light was gone. I have learned (the hard way) to grab it immediately. Wait, and it’s gone.

Here’s the husband psyching himself up for the trek. Someone else made the pine cone heart, but I love it!

I did pause for the amazing light though. I wasn’t procrastinating though. Nope. Not me. I’m an artist!

It was a little difficult, but not that bad. Mostly it was the elevation and the thinning oxygen. The view was more and more incredible the higher we went. This little tree made me stop for it. Not catching my breath. No not me. I’m an artist!

And then there was the other side –

That’s Lassen Peak back there.

And I was not resting. Artist, people!

Here we are at the top. Windy as heck, but worth it. Oddly the wind was alternately cool and hot. You could definitely feel a big temperature change from gust to gust.

The dirt had a few different colors that were fascinating. The red is most likely iron deposits.

You can walk right down into the crater in the cone, but we didn’t since we would just have to come out again. 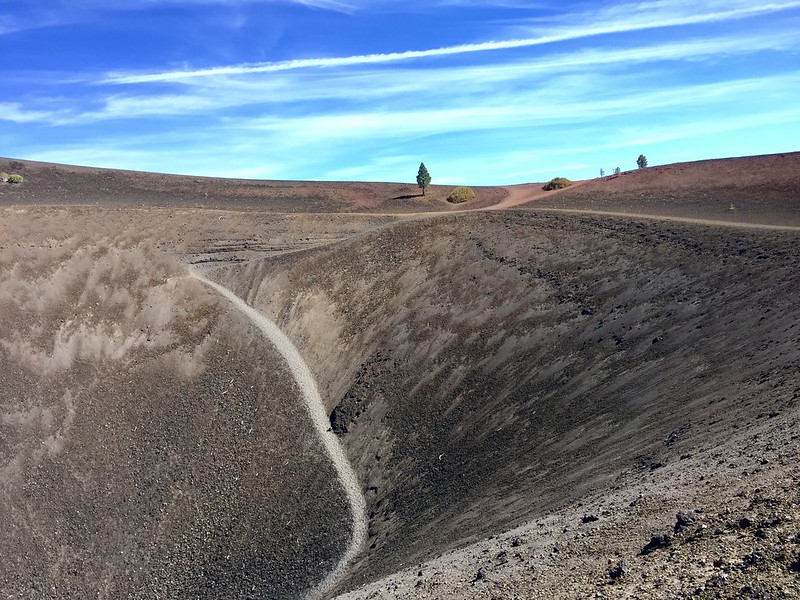 Here’s a quick iPhone video…sorry about the wind noise, but it couldn’t be helped. Here’s a quick video of the top. I deleted the sound because it was just wind and me breathing. No one needs that. And I haven’t gotten around to downloading any music to add to these yet. 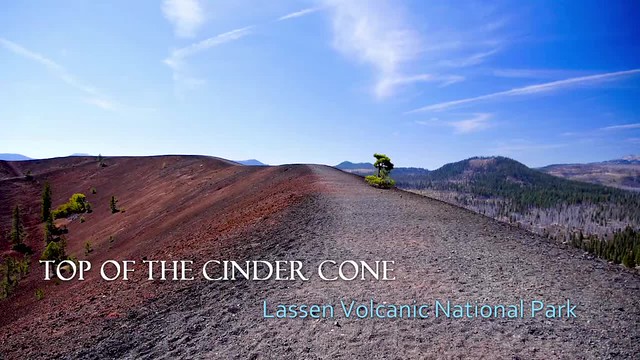 On the backside from where the main trail comes up are views of the lava field and the painted dunes. That’s Lassen Peak in the distance (second image). You can read about the 1915 explosion here on the USGS website and see some amazing photographs of the eruption.

The light was harsh, but made for some great textures!

On the way down, I put the GH3 in the backpack and just shot with the iPhone. It was almost like hiking on marshmallow. So shifting, gentle and fun. You could almost run down in the soft cinders. They should put chairlift up and charge tickets. 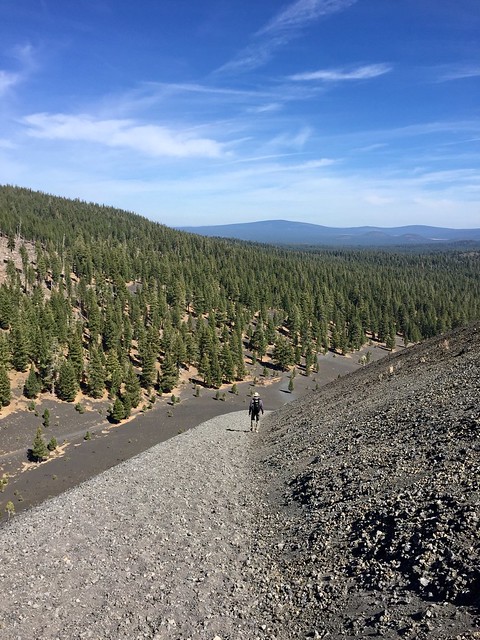 That little speck down on the bottom. That’s him again. It’s not a huge hill, but it makes everything look absolutely tiny. The base elevation is 6900 feet or so and the cone itself is only a shade under 750 feet. The path is steep though. There’s an easier way on the other side…or so people say, I didn’t look for it. To the right in the shot below you can see the lava flow and a little stripe of Butte Lake. I have a video of the dozens of butterflies on the shoreline…all looking for salt or other minerals. Or company. 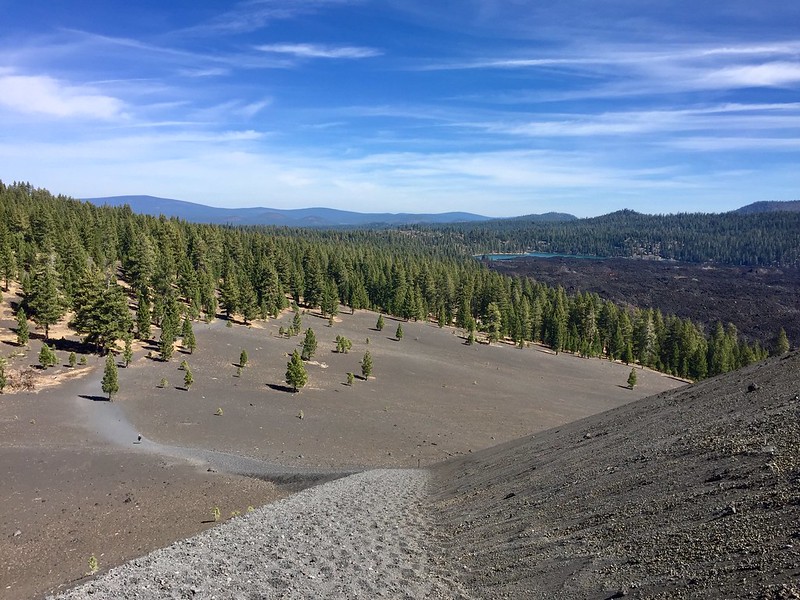 So that was our other major outing at Lassen Volcanic National Park. Of course there were things we didn’t get to do. In a park this size it’s hard to see everything.

Next up…some of the other things we saw at Lassen.