You thought I forgot about Portugal didn’t you?

Well I did, kinda. I got through processing all the photos I initially chose to work on and I put them up on my hosting sites, but that’s about as far as it went. So here is my final post about my terrific trip.

Our hotel was right in the middle of the city and in a few minutes walk I found this guy.

It wouldn’t be the only public wall art we found, so stick around.

Porto is by American standards an ancient city. It’s densely packed and vibrant, but I found it an easier city to walk in than Amsterdam, Brussels or even London. People take it easier here. Sure, cars cars cars, but they don’t seem determined to run you down at all costs.

It is a sister restaurant to one near Pinhao where we ate a most fabulous meal with a bunch of the folks in our group. Maybe the best meal I’ve ever had so we made a note to come back to this one for lunch. Before that though we had to work up an appetite with more walking and a little bit more shopping.

I’m no student of architecture, but I was fascinated and drawn to the buildings. So many different colors and styles; all of it intricately detailed.

Eventually everyone drifts towards the river. It’s the Douro of course, the same one from earlier in the trip. It makes the port for which the city is named.

All those big tents make up a market place and we bought a couple of items made from cork. I think they make you…just kidding. Portugal is the world’s largest supplier of cork which is the bark of a certain oak tree. I got a backpack purse large enough to hold my camera and my husband a hat because bald men need hats.

We made our way over one of the bridges (with handy sidewalks) to the sister city of Vila Nova de Gaia. Portugal takes its name from the combination of these two cities.

We didn’t have an agenda so we just wandered down side streets away from the crowds on the quay. It’s pretty hilly so there are staircases all over.

As we descended we saw these whimsical murals –

Aren’t they great? Too bad some has peeled away on the second one. Don’t know why I didn’t get a shot of the pink one, but maybe it was because lunch was calling. Back over the bridge we went.

After we got seated, we told the waiter about our great dinner at DOC and asked if they had a paired tasting lunch. They didn’t, but the sommelier said he’d be happy to put something together for us. We put ourselves in his capable hands!

I should have taken pictures of all the wine labels he served, but I got only one which was my favorite. It’s an Alvarinho (Portugese version of the Spanish Albariño) and was really good. I checked in a local wine shop and they didn’t have it. Bummer. I would have brought some home. 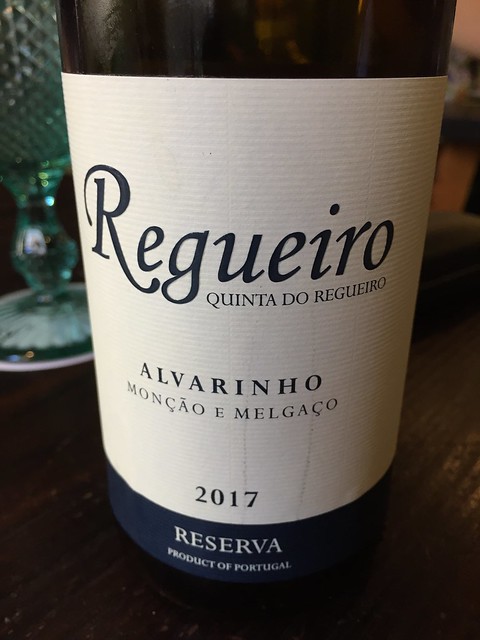 So that’s it! My trip to Portugal in seven posts. I haven’t heard where next year’s wine trip is likely to be, but I don’t think it will be long until we find out. South Africa? New Zealand? Eastern Europe? Italy? Who knows, but it will probably be great no matter where.